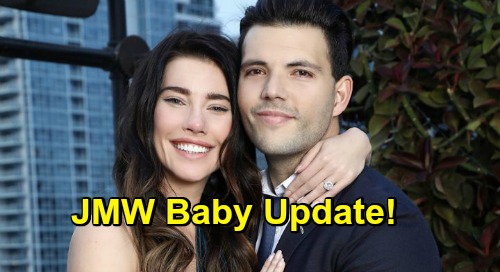 The Bold and the Beautiful (B&B) spoilers reveal that Jacqueline MacInnes Wood (Steffy Forrester) may have her bundle of joy by now. On Tuesday, Wood posted a potential hint about going into labor. She put up some new cowgirl photos of herself on Instagram, which featured Wood looking…well, very pregnant!

Wood’s caption said it was “time for the rodeo,” so it’s easy to guess what that meant. She certainly made it seem like a special delivery was on the way. Since then, there have been no updates to Wood’s social media accounts. She’s probably been busy bringing her son into the world, but there could be another reason for her silence as well.

Wood announced her pregnancy on Entertainment Tonight, so it makes sense that she’ll have a very public birth announcement, too. She’s likely chosen a website or magazine to publish the first pictures of her baby. Of course, Wood will undoubtedly have the usual comments of how she couldn’t be more thrilled. She’s definitely been excited about welcoming this kid with her handsome hubby.

Many B&B fans are anxious to get their first glimpse of the little fella. It feels like Wood’s had this bun in the oven for quite a while. Apparently, she’s been feeling the same way! A week ago, Wood posted an Instagram video of herself dancing in attempt to speed things up a bit. She added that she ate some spicy food in hopes that her water would break.

Since that was seven days ago and Wood posted Tuesday’s “rodeo” clue, it’s probably safe to assume Wood has her baby at this point. It’s just a matter of when the pictures will be released. The Bold and the Beautiful viewers will keep an eye out for them. We can already imagine how adorable Wood’s baby boy will be.

During the week of March 11-15, The Bold and the Beautiful spoilers say Steffy will make a major decision regarding her future. Her choice will affect Hope Spencer (Annika Noelle), Liam Spencer (Scott Clifton) along with the girls. It sounds like Steffy will leave Los Angeles either that week or the week after. That’ll be the last time we see Steffy until she gets back from her maternity leave.

No return airdate has been set just yet, but Wood should settle on one sooner or later. For now, B&B fans just want her to enjoy the baby bliss! We’ll keep you posted as other news comes in. Stay tuned to the CBS soap and don’t forget to check CDL often for the latest Bold and the Beautiful spoilers, updates, and news.