The Bold and the Beautiful Spoilers Next 2 Weeks: Steffy’s Future Choice Stuns Liam and Hope – Flo Refuses to Keep Lying for Reese 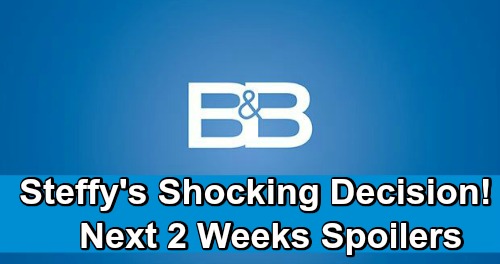 The Bold and the Beautiful (B&B) spoilers for the next two weeks tease that some tight spots are on the way. During the week of March 4-8, Zoe Buckingham (Kiara Barnes) will find herself in a jam when she’s forced to introduce Florence “Flo” Fulton (Katrina Bowden) to Hope Spencer (Annika Noelle). She’ll panic over the possibility that Flo’s going to blow up the baby swap scheme and cause trouble.

Zoe was furious when she first found out about Dr. Reese Buckingham’s (Wayne Brady) plot, but now she intends to do whatever it takes to protect him. Unfortunately, Flo will make that difficult when she grows closer to Hope and accepts a dinner party invitation. The Bold and the Beautiful spoilers say Flo will be overwhelmed in Hope’s presence that night. She’ll feel the need to blurt out the truth.

B&B fans can expect Flo to reconsider before the evening’s over, but Zoe will still be enraged over all this. She’ll hear that Flo was spending time with Hope, Liam Spencer (Scott Clifton), Wyatt Spencer (Darin Brooks) and Sally Spectra (Courtney Hope). Zoe will point out that the last thing Flo should be doing is mixing and mingling with people who could connect the dots.

Other Bold and the Beautiful spoilers say Liam will indeed have some suspicions regarding Flo and her motives. Thanks to a casual comment from Sally, Wyatt could wonder what Flo’s up to as well. The longer Flo sticks around, the more likely it becomes that she’ll get caught. That’s especially true since her guilt will almost be too much to bear.

Nevertheless, Zoe can’t babysit Flo round the clock. She’s got a love life to keep up, so she’ll make time for Xander Avant (Adain Bradley) and hope to make up for any earlier distractions. During the week of March 11-15, Reese will get a frantic and frazzled call from Flo. The Bold and the Beautiful spoilers say Flo will refuse to do this anymore. She’ll insist that she can’t keep Reese’s secret any longer.

Of course, Reese will try to talk Flo off the ledge. The same goes for Zoe, who’ll undoubtedly be called to put out this latest fire. Flo will be a mess, but Zoe should be able to calm her down and focus on the consequences of a confession. Since Flo won’t want to land behind bars, she should back off the idea of coming clean eventually.

Other Bold and the Beautiful spoilers state that Steffy Forrester (Jacqueline MacInnes Wood) will make a significant choice. It’ll involve her future as well as Liam and Hope’s. It sounds like Steffy will determine that Hope and Liam need space. If they’re going to heal and move forward as a couple, perhaps it’s best if Steffy and the girls aren’t too close right now.

Steffy might plan an extended vacation with Liam’s approval. Whatever the case, this is all building to Jacqueline MacInnes Wood’s maternity leave, which will take Steffy off canvas for a while. We’ll give you updates as other B&B news comes in. Stay tuned to the CBS often for the latest Bold and the Beautiful spoilers, updates, and news.