The Bold and the Beautiful Spoilers: Preview Week of March 4 – Flo’s Dinner Party Baby Meltdown – Begs Hope Not to Hate Her

BY Heather Hughes on March 1, 2019 | Comments: one comment
Related : Soap Opera, Spoiler, Television, The Bold and the Beautiful 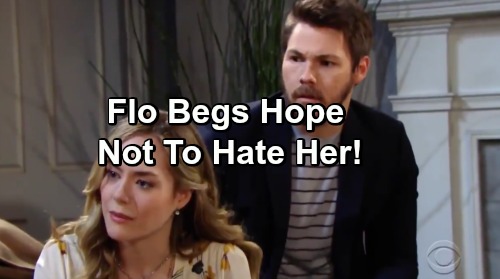 The Bold and the Beautiful (B&B) spoilers for the week of March 4-8 tease that Florence “Flo” Fulton (Katrina Bowden) will be driven to her breaking point. She’s already playing with fire by staying in Los Angeles, which Zoe Buckingham (Kiara Barnes) was more than willing to mention. Of course, Flo is also battling intense guilt about her role in Hope Spencer’s (Annika Noelle) suffering.

Part of Flo will want to come clean and take Dr. Reese Buckingham (Wayne Brady) down. She’ll maintain that Reese deserves to be locked up for the baby swap scheme. However, Zoe will warn Flo to keep her mouth shut or this will get ugly. She’ll contend that they’ll all be in serious trouble if she blabs.

Things will get worse after Hope spots Zoe and Flo talking. She’ll want to say hello to Zoe, which means an awkward introduction is on the way. The Bold and the Beautiful spoilers say Zoe will reluctantly let Flo and Hope meet. She’ll really have no choice since they’ll be right there in front of each other at Bikini Bar.

At some point during this conversation, Hope will learn Flo is “Phoebe Forrester’s” (Isabella de Armas and Redford Prindiville) “birth mother.” B&B viewers know that’s a lie, but Hope won’t have any reason to doubt it. She’ll practically light up when she realizes Flo is the one who gave Steffy Forrester (Jacqueline MacInnes Wood) such a wonderful gift.

The Bold and the Beautiful spoilers say Flo and Hope will quickly bond, which Zoe obviously won’t be happy about. Liam Spencer (Scott Clifton) won’t be pleased either when he gets updates. He’ll be weirded out by how clingy Flo seems and will wonder how Zoe’s mixed up in all this. That’s a big hint that could put him on the path to discovering Dr. Reese Buckingham’s (Wayne Brady) scam eventually.

In the meantime, Sally Spectra (Courtney Hope) will get some surprising news. After Wyatt Spencer (Darin Brooks) runs into Flo at Bikini Bar, B&B fans will learn their history. Flo and Wyatt were young lovebirds, but life tore them apart thanks to some of Quinn Forrester’s (Rena Sofer) drama. Sally may worry when she’s brought in the loop, but Wyatt should assure her that’s all in the past.

Naturally, Wyatt will have lingering feelings deep down, but he’ll think they can just be friends. He’ll want Flo to feel welcome in LA, so he’ll invite her over for a little dinner party. Wyatt will ask Hope and Liam Spencer (Scott Clifton) to enjoy a meal with them, too.

As the evening goes on, Flo will feel guiltier and guiltier. Her comments will lead to Hope’s assumption that Flo’s trying to tell them something. Flo will get choked up as she says this is about the baby. She’ll beg Hope and Liam not to hate her as she prepares to confess.

Alas, it looks like Flo will ultimately change her mind and offer a bogus excuse instead. She may claim she feels terrible about giving her baby up. Flo could even claim she wishes she hadn’t as a way to explain her emotional meltdown.