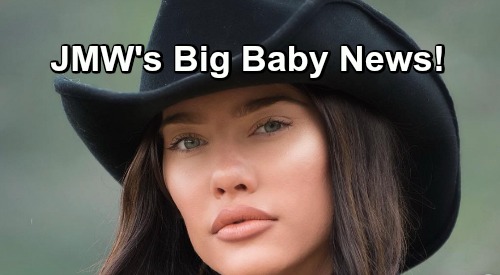 The Bold and the Beautiful (B&B) spoilers tease that the big moment is almost here. Ever since Jacqueline MacInnes Wood announced her pregnancy, B&B fans have been anxiously awaiting the birth right along with her. Wood eventually revealed that she’s having a boy, so at least we know what to expect when she finally has this little one.

Fortunately, it looks like the time has come. Based on Wood’s latest Instagram hint, we should be getting a birth announcement soon enough. Wood is currently on maternity leave, so she’s ready to take on her new role as Mom. She posted a pic of herself in a cowgirl outfit, which showed off her baby bump. Wood’s caption said, “Time for the Rodeo…” and she added a winking emoji to go along with it.

There are seemingly some big clues in that caption. It sure sounds like it’s Wood’s cute way of saying the baby’s coming now. Wood may have even had him already! After all, it might take at least a day or two before we hear anything official. Wood may want to share some private family time with her husband and newborn son before she shares the news publicly.

Regardless, this is great news for Wood and her hubby. We certainly wish their family the best. There’s no return airdate set for Steffy on The Bold and the Beautiful, but we do know she filmed her last scenes on February 13. Once Wood gets settled with the baby and recovers from the delivery, we should get updates on when B&B fans will see Steffy again – after her onscreen exit, of course.

Speaking of that exit, The Bold and the Beautiful spoilers say some fantastic drama’s brewing. Steffy will make a huge decision that’ll affect her own future as well as the future of “Lope.” Hope Spencer (Annika Noelle) and Liam Spencer (Scott Clifton) should be shocked by what Steffy chooses. It sounds like Steffy will decide to leave town and give Liam some space to heal his marriage.