The Bold and the Beautiful Spoilers: Tuesday, March 5 – Zoe Shuts Down Flo and Hope – Wyatt Considers Steffy For Liam

BY hellodrdavis on March 4, 2019 | Comments: one comment
Related : Soap Opera, Spoiler, Television, The Bold and the Beautiful 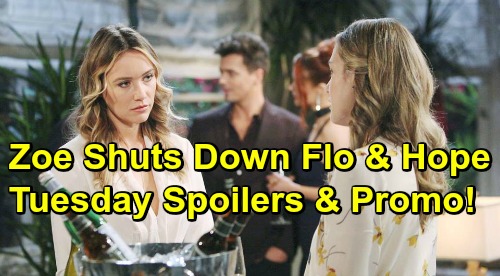 The Bold and the Beautiful spoilers for Tuesday, March 5, tease that Florence “Flo” Fulton (Katrina Bowden) will be on the verge of spilling the truth to Hope Spencer (Annika Noelle) about her baby being alive and about Reese Buckingham’s (Wayne Brady) baby swap. Flo feels terribly guilty about her role in Reese’s scam, and she’s a bit of a loose cannon at this point, so she’ll stutter and get dangerously close to telling Hope the whole sordid story.

But it looks like she’ll be interrupted by Zoe Buckingham (Kiara Barnes), who will appear at Bikini Bar once again. Zoe will be horrified to see Hope and Flo in the same air space, let alone talking, and she’ll quickly intervene. She’ll have no choice but to formally introduce the two women, and you can bet that she’ll stick around until Hope leaves the premises to make sure that Flo doesn’t blurt out the truth.

Look for Zoe to be terribly upset with Flo for her near confession. This is exactly why Zoe wanted Flo to go back to Las Vegas and stay the heck away from anywhere frequented by the Forresters and the Spencers. Zoe will also be horrified that now Hope has made a connection between herself and Flo, which is just a little too close for comfort.

Meanwhile, on the new B&B episode on Tuesday, March 5, Wyatt Spencer (Darin Brooks) and Liam Spencer (Scott Clifton) will continue their intense discussion at the cabin. Liam’s just told Wyatt about Hope’s desire that he get back together with Steffy Forrester (Jacqueline MacInnes Wood) for the sake of Kelly Spencer (Chloe Teperman and Zoe Pennington) and Phoebe Forrester (Isabella de Armas and Redford Prindiville).

And to Liam’s surprise, Wyatt pushed him a bit on whether he felt any desire to go back to Steffy. Of course, Liam maintained that he was all about his marriage to Hope, but Wyatt could see that Liam was struggling in his answer. On Tuesday’s episode, Wyatt will suggest that Liam at least give some consideration to Hope’s request.

Wyatt won’t be suggesting that Liam run back into Steffy’s arms immediately, but he’ll urge Liam to think about it and consider whether Hope might be right. That will give Liam a lot of food for thought, and his brother’s little push might lead to a more open and honest conversation between himself and Hope.