The Bold and the Beautiful Spoilers: Liam and Wyatt Team Up – Spencer Brothers Bust Zoe-Flo Connection

BY Kinsley Goldman on March 3, 2019 | Comments: one comment
Related : Soap Opera, Spoiler, Television, The Bold and the Beautiful 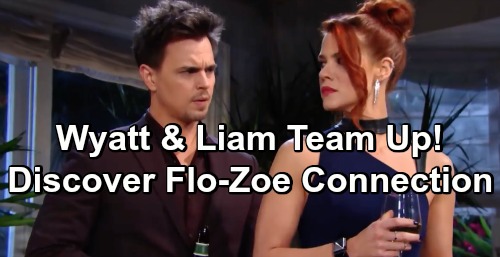 The Bold and the Beautiful (B&B) spoilers tease that Wyatt Spencer (Darin Brooks) will reassure his concerned brother. Liam Spencer (Scott Clifton) will fret about Hope Spencer (Annika Noelle) and all the sorrow she’s dealing with. He’ll bring Wyatt up to speed on how hard Hope’s been pushing for a “Steam” reunion, which Wyatt won’t think it such a horrible idea.

Wyatt won’t want Liam to dismiss Hope’s suggestion until he’s really thought things through. He’ll note that Hope could be right about Steffy Forrester (Jacqueline MacInnes Wood) and Liam becoming a united family with the girls.

However, Liam will stick to the plan. He wants to stand by Hope and focus on giving her the support she needs. Liam certainly won’t want to bail on Hope when she needs him most.

Wyatt will understand that and promise Liam there’ll be healing in time. That goes for Hope as well as their marriage, which is a bit strained due to Hope’s grief and the Steffy situation.

The Bold and the Beautiful spoilers say Wyatt’s pep talk should help. Of course, there could be another way for Wyatt to help his brother. Liam and Wyatt could end joining forces after some crucial clues surface.

Florence “Flo” Fulton (Katrina Bowden) will be at the heart of these hints. Her puzzling behavior will spark concerns for Liam, especially when Hope becomes so drawn to her new friend. Flo’s birth mom claims will raise issues and so will Zoe Buckingham’s (Kiara Barnes) knowledge. Liam may eventually feel like Zoe knows more than she’s letting on.

Wyatt could be a big help here since he’s got a history with Flo. Since they dated in high school, Wyatt may think he can use their past connection to get answers. Will Liam and Wyatt team up to get to the bottom of this? Will the Spencer brothers discover the true link between Flo and Hope?

Flo helped Dr. Reese Buckingham (Wayne Brady) give Hope’s baby to Steffy, so that bomb’s just waiting to explode! B&B fans can expect Steffy to be offscreen for a while due to Jacqueline MacInnes Wood’s maternity leave. This is the perfect time to shift the story to Liam and Wyatt’s search for the truth.