The Bold and the Beautiful Spoilers: Jacqueline MacInnes Wood Takes Maternity Leave – What’s Next for Steffy

BY Heather Hughes on February 28, 2019 | Comments: one comment
Related : Soap Opera, Spoiler, Television, The Bold and the Beautiful 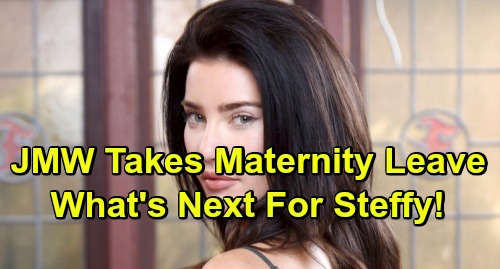 The Bold and the Beautiful (B&B) spoilers reveal that Jacqueline MacInnes Wood’s (Steffy Forrester) maternity leave is underway. She filmed her last scenes on February 13, so Steffy will be offscreen after her remaining episodes air. There’s no word yet on how Steffy will be written out, but B&B will surely deliver an explanation that ties in with the current baby swap saga.

According to Soaps in Depth, Wood doesn’t have a return airdate set yet. That makes sense considering Wood hasn’t actually given birth. Fortunately, her bundle of joy will be arriving soon and that should help Wood establish a timeline for her comeback. B&B fans will anxiously await news about Wood’s baby as well as what the future holds for Steffy.

The Bold and the Beautiful spoilers say the big baby secret will shift to the backburner while Wood is gone. The show intends to focus on other storylines, although some may remain connected – like Florence “Flo” Fulton’s (Katrina Bowden) past with Wyatt Spencer (Darin Brooks).

Flo’s mother, Shauna Fulton (Denise Richards) will also hit town on April 3, so that can spin things in another direction. When a baby swap shocker’s buried just under the surface, drama tends to trickle out everywhere. The secret doesn’t have to be front and center to hang like a dark cloud.

Steffy’s absence will give Hope Spencer (Annika Noelle) and Liam Spencer (Scott Clifton) time to focus on their marriage. Perhaps that’ll even be part of why Steffy takes off for a bit. She might think Liam needs to focus on Hope completely. Liam could still visit the girls wherever Steffy takes them, but she may feel like some distance would be a good thing for Hope.

Of course, Liam and Hope’s efforts may fail in the end. The Bold and the Beautiful spoilers say they’ll try to save what they’ve built together, but the loss of Beth Spencer will be difficult to overcome. Will Hope and Liam be divorced once Steffy reenters the picture?

B&B viewers won’t want to miss the twists and turns ahead. We’ll give you updates as other details emerge. Stay tuned to the CBS soap and don’t forget to check CDL often for the latest Bold and the Beautiful spoilers, updates, and news.

You asked for it.. here it is… #babymamadance… ! Yesterday I danced and ate spicy food.. on the way to the Dr. now for a quick check up! Hopefully I’m more dilated! 😂 Wish me luck! ❤️❤️ #werkintillmywaterbreaks #pregnant #pregnancy #babydancechallenge #mytribe #pastmyduedate #trusttheprocess #foreverpregnant #boldandthebeautiful #cbs