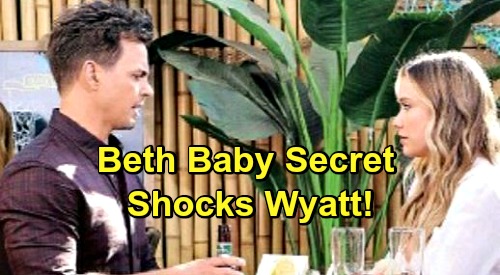 The Bold and the Beautiful (B&B) spoilers tease that Wyatt Spencer’s (Darin Brooks) link to Florence “Flo” Fulton (Katrina Bowden) will be revealed, which could certainly add to the baby drama. Wyatt is Hope Spencer’s (Annika Noelle) ex and Flo is the fake birth mom who helped Steffy Forrester (Jacqueline MacInnes Wood) illegally adopt Hope’s daughter. Things are bound to get messy!

Whether Flo is Wyatt’s old lover, former partner in crime or both, she’ll complicate his life in a big way. For starters, there’s Wyatt’s relationship with Sally Spectra (Courtney Hope). Their romance is going well, but Flo could spark jealousy for Sally. That’s especially true if Wyatt keeps secrets about their past together. Sally may get suspicious and wonder what’s going on between them.

Since Flo has proven herself shady, her history with Wyatt may come with dirt she can use to save herself. Wyatt might assume Flo is up to no good again, so he could easily do some digging. He could try to figure out what scheme Flo’s wrapped up in now. That could lead to some shocking revelations and a serious threat.

Will Wyatt pull off some solid detective work like Zoe Buckingham (Kiara Barnes) and determine that Steffy’s kid is actually Beth Spencer? Will he realize why “Phoebe Forrester” (Isabella de Armas and Redford Prindiville) looks so much like Kelly Spencer (Zoe Pennington and Chloe Teperman), her biological half-sister? Wyatt may collect all the clues and confront Flo eventually.

That’s when Flo could drop another B&B bomb and hold something from their past over Wyatt’s head. Depending on how bad it is, Wyatt could be convinced to stay quiet. It would be tough since he lost a baby with Hope when they were together. Wyatt also had to watch Hope struggle through the grief of losing Beth, so a big part of him would want to come clean.

However, we could be talking about something that might send Wyatt to prison. It could derail this life he’s building with Sally. The Bold and the Beautiful fans know Wyatt cares about Steffy, too. Flo may convince Wyatt that he shouldn’t rock the boat, especially if Steffy and Liam Spencer (Scott Clifton) have reunited by then.

Wyatt got mixed up in Bill Spencer’s (Don Diamont) plan and wrecked “Steam” before, so he may have reservations about doing it again. He may worry that the truth will ruin their united family. It sounds like it could become a complex situation, so Wyatt could end up keeping quiet.