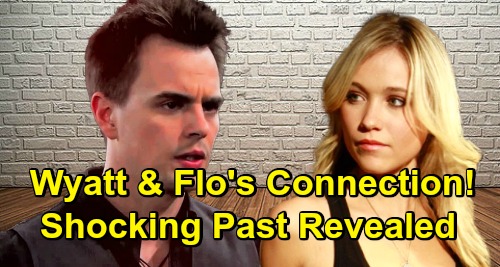 The Bold and the Beautiful (B&B) spoilers tease that Florence “Flo” Fulton (Katrina Bowden) has another stunning connection in Los Angeles. She knew Dr. Reese Buckingham (Wayne Brady) from her time working in Las Vegas, but Flo intends to make LA her home now. Her job at the Bikini Bar will let her interact with some new faces as well as some familiar ones.

During the week of March 4-8, Flo’s past link to someone will be revealed. It turns out that someone is Wyatt Spencer (Darin Brooks). The Bold and the Beautiful spoilers say Flo fits in Wyatt’s history somehow, but what’s the deal here? How do they know each other and how will it affect the story? Let’s consider some crucial B&B clues to figure that out.

For starters, Bowden tested with Brooks when she was going through the auditioning process. Most of the time, soaps tend to test people who could be paired up. That’s not always the case, but it makes sense if Wyatt has a past connection to Flo. Wyatt and Flo could be exes, so Brooks and Bowden may at least have to sell that their characters were involved once upon a time.

It looks like Wyatt and Flo have plenty of scenes coming up. In the latest issue of Soap Opera Digest, Bowden talked about how Brooks is her “go-to person” on set. “He’s been super-welcoming and knows he ropes,” Bowden said. “I feel so comfortable going up to him and asking him anything.” Of course, that kind of comfort likely comes from working closely with each other.

Once Wyatt and Flo cross paths again, they may discuss some buried secret. Could Flo know a few things Wyatt would rather keep under wraps? Even if they weren’t romantically involved, they might’ve had a shady partnership of some sort. There could be some dirt that comes back to haunt Wyatt soon enough.