BY Kinsley Goldman on February 25, 2019 | Comments: one comment
Related : Soap Opera, Spoiler, Television, The Bold and the Beautiful 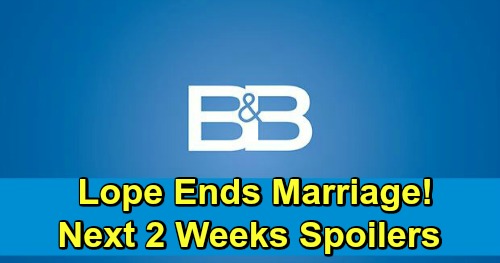 The Bold and the Beautiful (B&B) spoilers for the next two weeks tease that we’ll see total heartbreak for Liam Spencer (Scott Clifton). During the week of February 25-March 1, Hope Spencer (Annika Noelle) will lose control of her emotions. She’ll be in a nearly frantic state as she tells Liam and Steffy Forrester (Jacqueline MacInnes Wood) to be a family with the girls.

Hope will shut down Liam’s attempts to soothe her. She’ll want him to see that Kelly Spencer (Zoe Pennington and Chloe Teperman) and “Phoebe Forrester” (Isabella de Armas and Redford Prindiville) have to be the priority. Hope will want the kids to grow up with a dad who lives in the home and constantly showers them with affection. She’ll remove her wedding ring to prove she means it.

Later, Liam will give Wyatt Spencer (Darin Brooks) updates on how much Hope is struggling. He’ll fear that he’ll be unable to talk Hope out of this. Liam will just wish there was a way to help her understand. He’ll always be in the girls’ lives, but he could do that while remaining Hope’s husband.

Nevertheless, Hope will be adamant that she’s not part of this. She’ll think Steffy, Liam, Kelly and “Phoebe” are the four people who should make up this unit. In the meantime, Bill Spencer (Don Diamont) will already be causing Spectra Fashions drama. He agreed to revive it, but he’ll want to get a few things straight first.

Bill may have some stipulations on how this will be handled. He’ll just want to make sure he’s on the same page with Sally Spectra (Courtney Hope) and Wyatt. Since Bill’s trying to repair his relationship with Wyatt, he won’t try to cheat them. Bill will be honest and hopefully reach an agreement with “Wally” that’s fair.

Over with Florence “Flo” Fulton (Katrina Bowden), she’ll take a job at the Bikini Bar. When Zoe Buckingham (Kiara Barnes) finds out, she’ll blow her top. Zoe will think Flo needs to head back to Las Vegas and leave the whole baby situation alone. However, Flo will end up meeting Hope instead. She’ll eavesdrop on Hope’s discussion with Katie Logan (Heather Tom) and battle extreme guilt pangs.

During the week of March 4-8, Zoe will have to derail a different conversation. It looks like Flo will corner Hope after overhearing how much pain she’s in. The Bold and the Beautiful spoilers say Flo will have something significant to share. She may think she just can’t bear the weight of this secret anymore.

Zoe will quickly approach and drag Flo out of there. She’ll just have to trust that Flo didn’t spill too much and make Hope suspicious. Zoe will at least be glad she kept Flo from blabbing about the baby swap. Next, B&B fans will see devastation for Liam. He’ll get comfort from Wyatt, who’ll think better days are ahead.

Will Hope stand her ground and announce she’s divorcing Liam? Will “Lope” end their short marriage? The Bold and the Beautiful spoilers say some great scenes are coming up. We’ll keep you posted as other B&B news emerges. Stay tuned to the CBS soap and don’t forget to check CDL often for the latest Bold and the Beautiful spoilers, updates and news.