The Bold and the Beautiful Spoilers: Hope’s New Obsession – Plays Mom to Douglas, Bonds With Thomas

BY Heather Hughes on February 25, 2019 | Comments: one comment
Related : Soap Opera, Spoiler, Television, The Bold and the Beautiful 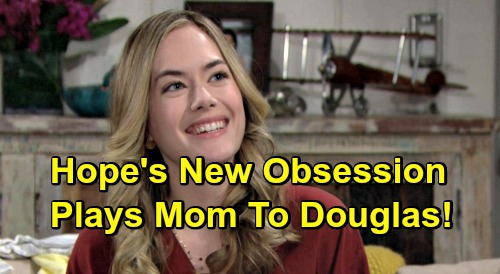 The Bold and the Beautiful (B&B) spoilers tease that Hope Spencer (Annika Noelle) will soon have two more holes in her heart. The biggest one was caused by the loss of Beth Spencer, but “Phoebe Forrester” (Isabella de Armas and Redford Prindiville) has been helping a little. Unfortunately, it seems Hope will lose “Phoebe” as well – at least in a way.

B&B fans know Beth is “Phoebe,” but Hope doesn’t have a clue. That’s why it’ll be like facing yet another crushing loss when she pulls back. Hope wants Liam to be a family with Steffy and the girls, so she’ll think it’s the right thing to do. Since Hope is clearly obsessed with “Phoebe,” Steffy and Liam may feel like some distance would indeed be a good thing.

However, Hope will have another wound thanks to her inevitable split from Liam. She’ll convince herself this is what’s best, but that doesn’t mean it won’t hurt. Hope will do whatever she can to move on with her life, but that motherly void will remain.

Fortunately, The Bold and the Beautiful spoilers say Thomas Forrester (now played by Matthew Atkinson) is coming back to town. He’ll have Douglas Forrester (Leighton and Jackson Rapo) in tow when he first airs on March 14. B&B could’ve just let Douglas stay off screen with Caroline Spencer (Linsey Godfrey), so it seems significant that he’s part of the story.

Could Hope trade her “Phoebe” obsession for a somewhat healthier one? She’s completely infatuated with “Phoebe,” which makes sense considering that’s her biological child. They share a bond that Hope can’t explain. Still, Hope will want to stay out of Liam and Steffy’s way. She’ll hope they’ll reunite and take care of the babies, so where does that leave her?

Hope may still long to be a mom, which is where Thomas and Douglas might come in. Perhaps Hope will latch onto Douglas next. Being there for the kid could give her hope. She could see that maybe she’s got some motherly fight left in her.

Naturally, Hope and Thomas could grow closer in the process. Will Hope heal her broken heart through a new kid obsession? Will she fall for Thomas, too? We’ll give you updates as other Bold and the Beautiful news comes in. Stick with B&B and don’t forget to check CDL often for the latest Bold and the Beautiful spoilers, updates, and news.