The Bold and the Beautiful Spoilers: Monday, February 25 Update – Hope Gives Liam Back To Steffy and The Kids

BY Heather Hughes on February 25, 2019 | Comments: one comment
Related : Soap Opera, Spoiler, Television, The Bold and the Beautiful 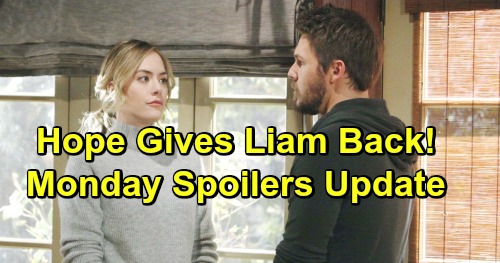 The Bold and the Beautiful (B&B) spoilers for Monday, February 25, tease that Wyatt Spencer (Darin Brooks) will be proud of his accomplishment. He’s fallen hard for Sally Spectra (Courtney Hope), so making her happy is his priority. Thankfully, Bill Spencer (Don Diamont) got on board with the plan to revive Spectra Fashions. That’ll give Sally and Wyatt something to celebrate soon enough.

Sally will be moved by how much Wyatt truly cares about her. She’s just as smitten as he is, so they’ll enjoy sharing in this victory. Sally will even promise a reward for Wyatt’s sweet efforts. She’ll plan a little private lingerie modeling, so Wyatt will definitely be down for that.

The Bold and the Beautiful spoilers say Sally and Wyatt’s relationship will deepen thanks to his Spectra move. They’ll hope the future is bright both personally and professionally. Unfortunately, curveballs are common when it comes to “Dollar Bill.” A small part of Sally will worry that Bill could still hinder the company reboot. She just won’t trust that everything will pan out like Wyatt expects.

However, Wyatt will offer reassurance and Sally will try to trust this. The bad news is Bill will indeed cause issues later this week. The good news is Wyatt will keep fighting for Sally’s dreams. He’ll surely make this happen for her once the crisis is resolved. Sally will just have to deal with Bill’s drama and have faith that Spectra will rise again.

In the meantime, Liam Spencer (Scott Clifton) will dismiss Hope Spencer’s (Annika Noelle) suggestion. She just argued that Liam needed to be with Steffy Forrester (Jacqueline MacInnes Wood) and the girls, but he’ll remind Hope that she’s his wife. Liam won’t want Hope thinking he doesn’t want her anymore. He’ll let Hope know that they’re a team and they have to stick together.

B&B spoilers say Hope just won’t think that’s an option anymore – not when Kelly Spencer (Zoe Pennington and Chloe Teperman) and “Phoebe Forrester” (Isabella de Armas) need a supportive dad. Hope will end up talking to both Steffy and Liam on Monday. She’ll become increasingly upset as she tries to make them see that they have to be a family.

The Bold and the Beautiful fans can expect some tough moments for all three of them. Liam and Steffy will see that Hope’s living a nightmare. Her grief is running the show now and it’s feeding this obsession with the babies – particularly “Phoebe.”

Hope will want Liam to be near the kids more than anything, so she’ll even take off her ring before long. She’ll push Liam to see that this is for the best, but he’ll just fear that Hope’s out of her mind in mourning. We’ll give you updates as other B&B info comes in. Stay tuned to the CBS soap and don’t forget to check CDL often for the latest Bold and the Beautiful spoilers, updates, and news.