The Bold and the Beautiful Spoilers: Wyatt and Ridge Agree With Hope’s Divorce Plan – Convince Liam To Reunite With Steffy

BY hellodrdavis on February 24, 2019 | Comments: one comment
Related : Soap Opera, Spoiler, Television, The Bold and the Beautiful 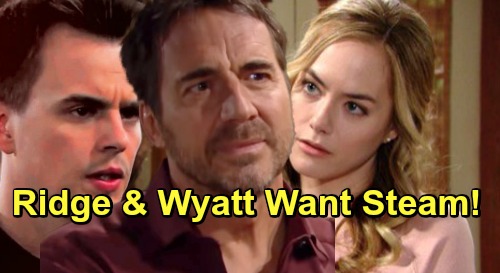 The Bold and the Beautiful spoilers tease that things will soon get very difficult for Liam Spencer (Scott Clifton) and Hope Spencer (Annika Noelle). Their marriage has been under serious stress since the “death” of their daughter Beth Spencer. Liam has watched helplessly as Hope has fallen into a deep depression, and in her grief she will soon make a drastic move.

In the presence of both Liam and Steffy Forrester (Jacqueline MacInnes Wood), Hope will return her wedding ring to Liam in a grand gesture and will insist that Liam go be a family with Steffy, Kelly Spencer (Chloe Teperman & Zoe Pennington) and Phoebe Forrester (Isabella de Armes). Liam will be stunned and will do his best to talk Hope out of her irrational state.

But Hope will be adamant that this is the only solution, and that she doesn’t want to stand in the way of Liam being a full-time, hands-on father to Kelly and Phoebe. She’ll insist that Steam reunite and raise the girls together.

Of course, Liam will be totally distraught at Hope’s actions. He’ll clearly see that she’s reacting out of her grief and pain, and he’ll want to help her through this difficult time. He’s really not interested in a Steam reunion right now, so he’ll seek some outside advice on the situation.

First, he’ll seek advice from his brother Wyatt Spencer (Darin Brooks). Wyatt is always a good sounding board and usually seems to have better instincts about the women in Liam’s life than Liam does. Liam will explain what’s going on and he’ll want Wyatt’s take on the matter, especially on how he can persuade Hope to back off of her position.

But Wyatt will have a surprising perspective. He’ll actually agree with Hope about where Liam’s priorities should be. Wyatt may point out that the children are the most important people in the equation, and that maybe Hope has a point about where Liam should be spending most of his time.

Ridge Forrester (Thorsten Kaye) will also have thoughts on the matter, and he’ll agree that Liam should consider going back to Steffy as well. Of course, Ridge has wanted Liam to be with Steffy all along, so his opinion probably won’t come as a surprise to Liam or anyone else.

But will Liam be influenced by Wyatt and Ridge? It looks like he won’t be immediately convinced that he should reunite with Steffy and form a family once again, as B&B spoilers say that he’ll fight for his marriage to Hope. He won’t be willing to just walk away from his marriage, and it will be interesting to see how he deals with Hope going forward.

Do you think that Liam will eventually be persuaded to leave Hope and focus on Steffy and the girls? Stay tuned to the CBS soap and don’t forget to check CDL often for the latest Bold and the Beautiful spoilers, updates, and news.