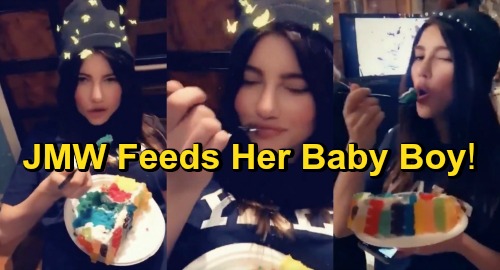 The Bold and the Beautiful spoilers has some fun news to pass on about some recent on-set festivities at B&B. Jacqueline MacInnes Wood, who portrays Steffy Forrester on the CBS soap, posted some videos on JMW Snapchat account during a retirement party for “Laura,” one of B&B’s stage managers. One of the videos is captioned: “Our beautiful stage manager is retiring. It’s a bittersweet day.”

It seems that the centerpiece of the party was a huge cake covered with Gummi Bears, and a 9-months pregnant Jacqueline dug right in. On the videos, she’s shown dancing around festively, then lounging on the floor, while eating a giant piece of the cake. She captioned these videos with the following hashtags: #babywantscake #yesimstillpregnant.

Some other B&B stars make cameos in Jacqueline’s videos as well. Don Diamont (Bill Spencer) and Scott Clifton (Liam Spencer) are seen joking around with Jacqueline while Katrina Bowden (Florence “Flo” Fulton) playfully steals a Gummi Bear from Jacqueline’s piece of cake. In addition, Darin Brooks (Wyatt Spencer) makes a brief appearance in the background of one of Jacqueline’s videos.

For those who are wondering, Jacqueline is officially past her due date. She recently posted an update on her Instagram account where she stated: “So, I’m past my due date! Dr. originally had me at the 12th then put me to the 19th and here we areeeee!!…Trying not to be induced but if that’s God’s plan than that’s the plan!”

Jacqueline is certainly remaining active in these final days of her pregnancy. We’ll keep you updated on any baby news as it comes in! Stay tuned to the CBS soap and don’t forget to check CDL often for the latest Bold and the Beautiful spoilers, updates, and news.

He wants cake, he gets cake. 💙#BoldandBeautiful pic.twitter.com/dKbt8KETOu