The Bold and the Beautiful Spoilers: Pre-Birth Jacqueline MacInnes Wood and Annika Noelle – Bring On The Baby Music Video

BY hellodrdavis on February 19, 2019 | Comments: one comment
Related : Soap Opera, Spoiler, Television, The Bold and the Beautiful 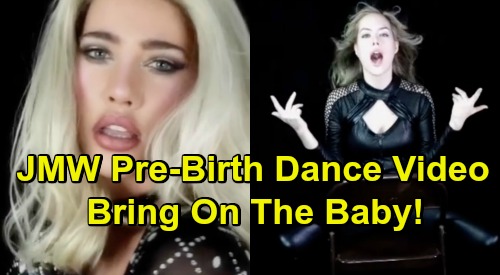 The Bold and the Beautiful spoilers has some fun news to pass on about a new and exciting team-up between Jacqueline MacInnes Wood (Steffy Forrester) and her co-star Annika Noelle (Hope Spencer). The two actresses had a little fun in between scenes and created a mini music video together, which Jacqueline posted on her Instagram feed.

JMW and Annika totally let loose, dressed up, and danced in front of the camera, with everything set to the Britney Spears song “Stronger.” The ladies gave a great performance, and it’s clear that they had a good time together.

In Jacqueline’s caption for the video, she explained that they needed to lighten the mood, since Annika had been filming so many emotional and heavy scenes lately. Of course, she’ll likely referring to the emotional scenes related to the baby death/baby swap storyline.

Specifically, Jacqueline said: “@annikaoelle has been doing such a fabulous job with these heavy/emotional scenes on #theboldandthebeautiful I thought I’d lighten up the mood…drag her into my dressing room, make her put on a unitard and shoot a Britney video…this is what really happens in between scenes. @thecourtneyhope you’re next!! Edited by me.”

Of course, we should note that Jacqueline performed her dance moves while fully nine months pregnant, so that’s quite a feat! She even tagged her message and the video with the tags #9monthspregnant, #babyisstillcooking, and #werkintillmywaterbreaks.

Jacqueline’s followers overwhelmingly love the video and have been responding in droves with flattering comments. “THIS IS ICONIC,” one follower responded, and another stated “You guys are a trip, Love it!!”

We’ll have to keep an eye out for future videos. Jacqueline MacInnes Wood promised in her caption that Courtney Hope (Sally Spectra) was next, so you never know when we might be treated to a follow-up!

Did you enjoy Jacqueline and Annika’s video? Stay tuned to the CBS soap and don’t forget to check CDL often for the latest Bold and the Beautiful spoilers, updates, and news.