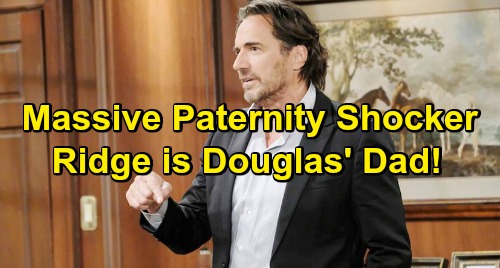 The Bold and the Beautiful (B&B) spoilers tease that the baby swap storyline will remain front and center on the CBS soap. However, there’s a chance it could serve as a distraction. Everyone’s waiting on the truth about Hope Spencer’s (Annika Noelle) baby to explode, but what if there’s another huge secret just waiting to unravel?

You’ve probably heard by now that Matthew Atkinson (ex-Austin Travers on The Young and the Restless) has joined the cast of B&B. He’ll be taking over the role of Thomas Forrester starting March 14. Now that Dr. Taylor Hayes (Hunter Tylo) is around and Steffy Forrester (Jacqueline MacInnes Wood) has a brand-new bundle of joy, the Forresters will want Thomas back for a little family reunion.

Ridge Forrester (Thorsten Kaye) will agree that some family time would be nice. It won’t be long until Thomas flies in – and he’ll bring someone special with him. Douglas (Leighton and Jackson Rapo) will also make a comeback for this storyline, which may be significant. New Thomas himself offered a hint about it in the latest issue of Soap Opera Digest.

Atkinson gave an interview about what might be ahead on The Bold and the Beautiful. It turns out he met and became friends with Linsey Godfrey (ex-Caroline Spencer on B&B) while he worked at Y&R. Godfrey is busy playing Sarah Horton on Days of Our Lives now, but her offscreen B&B character could still be part of the story.

“I can say that it really helps that I can put a face to Caroline because I know Linsey,” Atkinson said. “So, who knows? There may be some deep, dark secrets that are going to come to light.” Atkinson also admitted that Ridge and Thomas’ complicated history would indeed come into play. When it comes to this father and son, “There are a lot of emotions to be explored.”

Ridge tried to pass Douglas off as his own child before Thomas eventually learned the truth about his son…but was it really the truth? Although Ridge thought it was virtually impossible for him to father a child, what if he’s indeed Douglas’ dad? That’d certainly be a deep, dark secret.

If Caroline had a hunch and got a DNA test to confirm it, she may have hidden the shocker. Caroline wouldn’t want to rock the boat with Thomas, right? A paternity shakeup could tear Caroline and Thomas apart, which would allow Thomas to stick around LA much longer.

It would also lead to some messy family drama. Douglas has bonded with Thomas as his dad, so Ridge probably wouldn’t interfere with that. Still, Douglas’ true paternity would always be hanging over them. This could even serve as a setup for Hope or Steffy Forrester’s (Jacqueline MacInnes Wood) suspicions about “Phoebe Forrester” (Isabella de Armas and Redford Prindiville).

One DNA test could spark thoughts of another. We could go from a paternity scandal to a birth mom bomb! Do you think Douglas could be Ridge’s son after all? The Bold and the Beautiful spoilers say some interesting developments are brewing, so stay tuned. We’ll give you updates as other B&B news comes in. Stick with CBS soap and don’t forget to check CDL often for the latest Bold and the Beautiful spoilers, updates, and news.