The Bold and the Beautiful Spoilers: Monday, February 25 – Hope Pushes Liam To Reunite With Steffy – Wyatt and Sally Celebrate

BY hellodrdavis on February 24, 2019 | Comments: one comment
Related : Soap Opera, Spoiler, Television, The Bold and the Beautiful 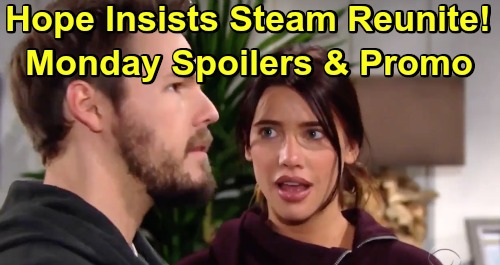 The Bold and the Beautiful (B&B) spoilers for Monday, February 25, tease that Liam Spencer (Scott Clifton) will have some alarming news for Steffy Forrester (Jacqueline MacInnes Wood). Liam has just had a disturbing conversation with Hope Spencer (Annika Noelle) during which Hope urged Liam to reunite with Steffy and become a family with Kelly Spencer (Chloe Teperman and Zoe Pennington) and Phoebe Forrester (Isabella de Armes and Redford Prindiville).

Liam tried his best to disabuse Hope of the idea that he should be with Steffy and the girls as a full-time dad, but Hope was hearing none of it. Hope is in deep grief over losing Beth Spencer and she feels terribly guilty for being the one thing that’s keeping a family apart. Of course, Liam doesn’t see it that way at all; he remains committed to his marriage to Hope and wants to stay with her.

On Monday’s episode, Steffy and Liam will chat about Hope’s demand and they’ll realize together that Hope is in a very bad place. Liam will likely be worried that Hope’s on the verge of asking for a divorce, and neither Steffy or Liam will want to see that happen. They’ll need a plan to convince Hope that her needs are important too, but how will they convince her?

Of course, the terms of the deal are that Wyatt will go back to Spencer Publications, so he’ll have to let the folks at Forrester know about his impeding departure, as will Sally. But for now, Wyatt and Sally will be on cloud nine and dreaming big dreams for their future.

The two lovebirds will celebrate big as they look toward their future. But we should note that B&B spoilers indicate that Bill will soon throw Sally a curve ball when it comes to the Spectra revival, so her path to success may not be so smooth after all.