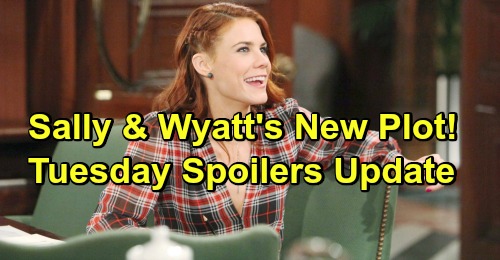 The Bold and the Beautiful (B&B) spoilers for Tuesday, February 26, tease that Sally Spectra (Courtney Hope) will proceed with caution. That’s a good idea when you’re doing business with Bill Spencer (Don Diamont)! He’s agreed to revive Spectra Fashions, which Sally is thrilled about. Still, she’ll worry that some problems will emerge soon. Sally hasn’t had much success dealing with Bill in the past.

Wyatt Spencer (Darin Brooks) will promise he’s got Sally’s back, but he’ll take steps to ease her mind even further. Since additional negotiations will be required, Wyatt will want to make sure Sally’s ready. The Bold and the Beautiful spoilers say they’ll do some role-playing as part of that strategy. It looks like Wyatt will act like he’s Bill so Sally can practice.

Sally will have her usual moxie in their mock conference, so Wyatt will think she’s got this. B&B fans can expect some warm moments once they wrap things up. Their role-playing session will lead to a stronger connection, so Wyatt and Sally are definitely falling harder for each other every day.

Sadly, the same can’t be said for Liam Spencer (Scott Clifton) and Hope Spencer (Annika Noelle). Their marriage is on the verge of falling apart! The Bold and the Beautiful spoilers say Steffy Forrester (Jacqueline MacInnes Wood) will try to soothe Hope on Tuesday. She’ll think Hope should cut out all this talk of a “Steam” reunion.

Liam will eventually back Steffy up on that. He’ll remind Hope of his earlier reassurance and push her to trust in their love. Liam will understand that Hope’s been in a dark place since Beth Spencer “died,” but he’ll want to stick together. However, Hope will keep repeating how Liam and Steffy need to be a family with the girls. It’ll become Hope’s mantra as she spirals out of control.

Next, Hope will urge Liam to take her wedding ring back and move on. She’ll think Steffy, Kelly Spencer (Zoe Pennington and Chloe Teperman) and “Phoebe Forrester” (Isabella de Armas and Redford Prindiville) all belong in the same home. When Hope refuses to take no for an answer, Liam will know the situation is dire. He’ll worry he may not be able to fix his crumbling relationship.