The Bold and the Beautiful Spoilers: Steffy Rejects Liam, Won’t Be Backup Bride – Steam Back On After JMW Maternity Leave 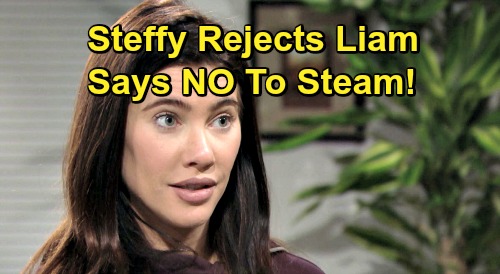 The Bold and the Beautiful (B&B) spoilers tease that Hope Spencer’s (Annika Noelle) family plan may not turn out like she expects. She’s trying to make a sacrifice for the sake of Steffy Forrester’s (Jacqueline MacInnes Wood) girls, but she’ll certainly face some resistance. Even after Hope hands Liam Spencer (Scott Clifton) his wedding ring back and demands a divorce, “Lope” won’t end without a fight.

Liam will do whatever he can to keep Hope by his side, but it looks like she’ll insist on splitting up. Of course, Liam and Steffy won’t want to jump right into a relationship again. They’ll undoubtedly count on Hope healing and coming around in time. Steffy and Liam will know how much their reunion would hurt Hope, despite the fact that she claims to want it.

Nevertheless, The Bold and the Beautiful spoilers say Hope may stand her ground on this. She’ll be just as convinced that Liam and Steffy will find their way back to each other. Hope might think it’ll happen if she steps aside long enough – and she’s probably right. That doesn’t mean there won’t be bumps in the road though. Hope isn’t the only issue Steffy and Liam will have to get past.

Steffy may worry about reviving the “Steam” romance like this. She’d love to get back together with Liam, but is she really fine with being the backup option? You could argue that Hope was consolation prize a while back, but the loss of Beth Spencer brought a deeper “Lope” connection. Steffy might fear she’s setting herself for more heartbreak, especially since Liam’s been known to waffle.

As Liam bonds with Steffy and the babies in the coming weeks, he may shift his opinion. Liam might feel like Hope was right about their picture-perfect family. Since B&B loves to let Liam hop from marriage to marriage, he could pop the question quickly. Would Steffy turn him down? She might reject the idea of being Liam’s backup bride and suggest they should stick to co-parenting.

However, Steffy would probably change her mind sooner or later. Liam could fight for his family and help Steffy see that this reunion would be a good thing. By the time Jacqueline MacInnes Wood returns from her upcoming maternity leave, Steffy may have a new attitude about a “Steam” reboot.

Sadly, the secrets surrounding “Phoebe Forrester” (Isabella de Armas and Redford Prindiville) could hang over this reunion like a dark cloud. “Phoebe” is actually Beth, so The Bold and the Beautiful spoilers say a major storm’s brewing! We’ll give you updates as other B&B news comes in. Stay tuned to the CBS soap and don’t forget to check CDL often for the latest Bold and the Beautiful spoilers, updates and news.