The Bold and the Beautiful Spoilers: Steffy’s Had Enough of Lope’s Drama – Takes Phoebe and Kelly and Leaves

BY hellodrdavis on March 2, 2019 | Comments: one comment
Related : Soap Opera, Spoiler, Television, The Bold and the Beautiful 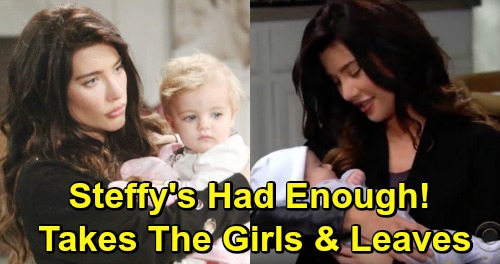 The Bold and the Beautiful spoilers tease that Steffy Forrester (Jacqueline MacInnes Wood) will make a significant decision about herself and her girls. Steffy has recently welcomed a new baby into her home, and with two little ones her life is pretty hectic. She’s been seen struggling to manage feedings, the onslaught of laundry that babies produce, and diaper changes for two babies. It’s a lot to handle.

But on top of it all, Steffy has had Hope Spencer (Annika Noelle) and Liam Spencer’s (Scott Clifton) drama to deal with as well. Steffy’s just trying to manage her life, but she’s constantly got Hope and/or Liam coming over and dropping their drama at her feet.

Just recently, Lope had their big moment where Hope removed her wedding rings and tried to push Liam to reunite with Steffy…all at Steffy’s house with the girls in the next room.

And then there’s Hope making impromptu visits to see Phoebe Forrester (Isabella de Armas and Redford Prindiville), during which her behavior is worrisome. She’s developed a strange relationship with Phoebe that, at least for the time being, no one really understands.

It’s all very troubling for Steffy, and she may be starting to worry that all the tension and emotion in the air isn’t good for the girls.

Of course, Steffy feels terrible for what Lope are going through right now and she wants to help as much as she can, but there’s only so much she can do. Besides, Steffy should really be away from the drama, since she’s not a party to Lope’s marriage. Steffy really doesn’t want to be constantly having to remind Hope that she doesn’t want to be with Liam.

B&B spoilers indicate that Steffy will soon make a decision about her future as well as Lope’s future. It seems that she’ll determine that Lope needs some space from herself and the girls.

Steffy won’t want to separate Liam from Kelly Spencer (Chloe Teperman and Zoe Pennington) for too long, but she’ll think that he and Hope really need to focus on healing and their marriage together.

So, what will Steffy do? Well, one option is that she’ll plan a getaway with the girls. She could take Taylor Hayes (Hunter Tylo) or Amelia (Nicola Posener) with her for support and enjoy some time away from all the drama.

They could all jet off to a remote location and have a great, relaxing time. It would give Steffy a chance to really bond with Phoebe without a constant influx of people in her home.

This scenario would mesh well with Jacqueline MacInnes Wood’s maternity leave schedule, too. She’ll be off canvas for a while, and a vacation away would be the perfect storyline to get her out of the drama for a while. Hope and Liam could focus on themselves and their own issues privately, and things could calm down for a while.

Would you like to see Steffy shut the door on Hope and Liam for a while and just focus on her family? Stay tuned to the CBS soap and don’t forget to check CDL often for the latest Bold and the Beautiful spoilers, updates, and news.