BY hellodrdavis on March 5, 2019 | Comments: one comment
Related : Soap Opera, Spoiler, Television, The Bold and the Beautiful 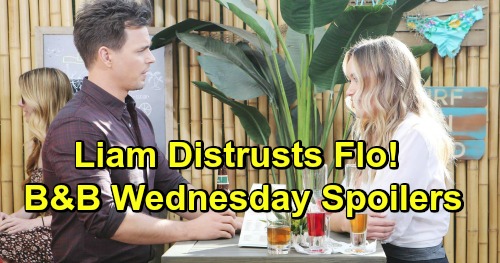 The Bold and the Beautiful spoilers for Wednesday, March 6, tease that Hope Spencer (Annika Noelle) will have quite a story for Liam Spencer (Scott Clifton). She’s just arrived home from Bikini Bar, where she was stunned to meet “Phoebe Forrester’s” (Isabella de Armas and Redford Prindiville) birth mother, Florence “Flo” Fulton (Katrina Bowden).

Liam will be stunned as Hope recounts the details of her meeting with Flo, and how Flo and Zoe Buckingham (Kiara Barnes) apparently have known each other for a while. Hope will be emotional as she tells Liam all about their conversation, and about how uncomfortable Flo seemed. But Hope will feel grateful that she was able to meet Phoebe’s birth mother, and she’ll feel a strange connection to her.

Hope will feel that she and Flo have each been through a similar loss. Sure, Flo’s baby didn’t die like Beth Spencer did, but Hope will reason that they’ve both been through a serious loss involving a baby. Hope will go on about her feelings related to the encounter with Flo, but Liam will find himself growing suspicious.

Liam will think that it’s just too much of a coincidence that Hope of all people would just run into Phoebe’s birth mom. He may recall that Phoebe’s birth mom was supposed to be from Las Vegas, and he’ll likely remember that she didn’t want an ongoing relationship with her baby. It will just strike Liam as odd that Flo would (a) still be in LA, and (b) be anywhere near Hope.

Of course, Liam truly believes that Beth is dead, so of course he won’t immediately suspect that any of this has to do with Beth. But he may find himself worrying that perhaps Flo is sticking around Los Angeles in order to be around Phoebe. He could worry that Steffy Forrester (Jacqueline MacInnes Wood) might have some problems with Flo going forward.

Meanwhile, on the new B&B episode on Wednesday, March 6, Wyatt Spencer (Darin Brooks) will be absolutely stunned to realize that the waitress he just bumped into at Bikini Bar is none other than his high school girlfriend Flo. He and Flo will be taken aback to see each other after all this time.

The two will take a walk down memory lane, and as it turns out Flo and Wyatt were in love as teenagers, but something happened and Wyatt and Quinn Forrester (Rena Sofer) had to leave town abruptly without even saying goodbye. Wyatt will probably want to offer an apology to Flo after all these years and catch up on what Flo’s been up to.

But it looks like there won’t be any hard feelings left over after all this time, and Wyatt and Flo will enjoy reconnecting. Of course, Flo will have no idea that Wyatt is Hope’s ex-husband and the brother of Beth’s father, but it looks like she’ll be learning all about Wyatt’s connection to Beth’s real birth parents shortly.