The Bold and the Beautiful Spoilers: Steffy Heads to Paris with the Girls, Hits Hope Hard – Will Lope Divorce? 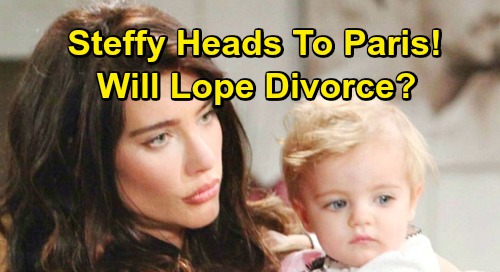 The Bold and the Beautiful (B&B) spoilers tease that Hope Spencer (Annika Noelle) will face some devastating news. She’ll be completely blindsided when Steffy Forrester (Jacqueline MacInnes Wood) decides to make a big move. Steffy will insist that she’s thought long and hard about this. She’ll truly believe it’s the right call, so she’ll trust that Hope and Liam Spencer (Scott Clifton) will understand.

Steffy will feel like Kelly Spencer (Zoe Pennington and Chloe Teperman) and “Phoebe Forrester” (Isabella de Armas and Redford Prindiville) are getting in “Lope’s” way. She’ll think as long as she’s around with the babies, Hope can’t truly move on from this idea of a “Steam” reunion. Since Hope believes Liam would be better off with Steffy and the girls, Steffy will plan to prove her wrong.

B&B spoilers say Steffy will announce that she’s leaving for Paris. She’ll think it’s best if she spends some time with the girls there alone. Steffy will argue that this will give Hope and Liam a chance to heal without distractions. She’ll be particularly interested in breaking Hope of this “Phoebe” obsession. Steffy has never really thought that was an appropriate coping strategy for this grieving mom.

The Bold and the Beautiful spoilers state that Hope will be crushed by Steffy’s decision. She’ll most likely try to talk her out of it for several reasons. For starters, the last thing Hope wants to do is be the reason Liam spends even less time with those little ones. The whole point of Hope pushing Liam toward Steffy is so he can be a more involved father, so she won’t like this development at all.

Hope will also hate that she’s losing her coping crutch. From the first moment she held “Phoebe,” Hope felt a special connection with her. She’ll feel like part of her heart is leaving with Steffy, so that’ll be a tough blow. Hope has so little joy in her life these days. “Phoebe” was the one bright spot, so she’ll wonder how she can possibly fill that void now. Hope just won’t know what she’s going to do.

That brings us to the next problem this presents. Without Steffy and the girls in town, Hope and Liam will be forced to address the real issues in their marriage. They’ll have to take a closer look at things they aren’t on the same page about. Liam and Hope have been mourning in very different ways, so finding common ground will be even harder once that becomes their focus.