The Bold and the Beautiful Spoilers: Hope Becomes Obsessed With Douglas – Thomas Worries About Her Connection To Son

BY hellodrdavis on March 7, 2019 | Comments: one comment
Related : Soap Opera, Spoiler, Television, The Bold and the Beautiful 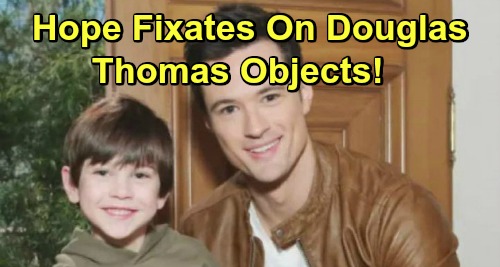 The Bold and the Beautiful spoilers tease that Hope Spencer (Annika Noelle) will soon get a shock. She’s been having a terrible time dealing with the death of her daughter Beth Spencer, and the one shining light in her life has been little Phoebe Forrester (Isabella de Armas and Redford Prindiville). Hope just can’t shake the strong connection she feels with Phoebe, and when she holds Phoebe, she feels healed.

But soon, Steffy Forrester (Jacqueline MacInnes Wood) will decide that it’s time for her and her girls to get away from Los Angeles for a while. Steffy feels like she’s in the middle of Hope and Liam Spencer’s (Scott Clifton) marriage, and that Lope needs some time away from Kelly Spencer (Chloe Teperman and Zoe Pennington) and Phoebe. So Steffy will take the girls and go to Paris for a while.

Hope will be shocked by Steffy’s decision, as she won’t want to be far away from Phoebe. It will take some adjustment for her to be away from Phoebe for even a few weeks, but she’ll do her best to move forward and deal with her grief and her marriage.

But around the time that Steffy and her girls leave for Paris, something else will happen. Thomas Forrester (Matthew Atkinson) will return home along with his young son Douglas Forrester. Although Douglas isn’t an infant, Hope will make an instant connection with him. It seems that Hope’s maternal instincts just need somewhere to go, and she’ll end up having a special connection with the little boy.

But will this really be healthy for Hope? She may be simply transferring her obsession with Phoebe to Douglas. It would be unfortunate if most of her attention gets drawn to Douglas rather than to working on her marriage to Liam. She and Liam need a chance to grieve and heal together without her attention being divided.

Do you think it’s time for Hope’s family to suggest that she get professional help to deal with her grief? Stay tuned to the CBS soap and don’t forget to check CDL often for the latest Bold and the Beautiful spoilers, updates, and news.