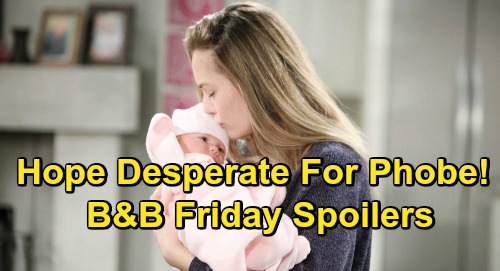 The Bold and the Beautiful spoilers for Friday, February 8, tease that Zoe Buckingham (Kiara Barnes) will head back to her dad’s apartment in search of more answers from Florence “Flo” Fulton (Katrina Bowden). Her last conversation with Flo didn’t sit well with her, and she’s sure that Flo’s holding back information that would explain Reese Buckingham’s (Wayne Brady) sudden departure from Los Angeles.

Zoe knows that her dad was in some sort of trouble before he left town, but she has no idea that he was in debt for $200,000 and paid off that debt by selling Hope Spencer (Annika Noelle) and Liam Spencer’s (Scott Clifton) baby to Taylor Hayes (Hunter Tylo) and Steffy Forrester (Jacqueline MacInnes Wood). Flo, however, knows the truth, and she’s liable to spill the beans to Zoe.

Flo has been feeling terribly guilty about her role in the adoption scam. She posed as the birth mom in order to make the adoption look legitimate, and she’s been feeling horrible about what she did ever since. It looks like her guilt will make her vulnerable to Zoe’s fierce questioning on Friday’s episode.

Zoe will confront Flo for a second time, and this time she’s going to demand answers and she won’t back down. She’ll keep after Flo, and the two women will end up having a heated, explosive exchange. It looks like Flo will spill some details, but it’s not clear which version of the truth she’ll give to Zoe. One thing’s for sure…Zoe will figure out from their conversation that Flo has something to do with Steffy’s newly adopted baby.

As for the rest of the truth, Zoe may be left to figure that out on her own. Flo could easily spill to Zoe that she’s the birth mom of Steffy’s baby without giving any additional details. But that would mean that Zoe would know that Reese was involved in Steffy’s adoption, which is something that Reese worked hard to keep a lid on.

Meanwhile, on the new B&B episode on Friday, February 8, Hope will find herself with baby Phoebe Forrester (Rosalind Aune and Isabella de Armes) on her mind. When Steffy put Phoebe into Hope’s arms, Hope felt an overwhelming sense of peace and well-being…something she hadn’t felt since before Beth Spencer died.

Hope will feel drawn to Phoebe, and she’ll ask Liam to take her to Steffy’s house to see Phoebe again. But will Liam feel that this is a good idea? He might be initially cautious, given that Hope is starting to obsess a bit over Phoebe. But it looks like he’ll give in and take Hope to see the baby once again.

The visit may come as a surprise to Steffy, who has been trying to keep a respectful distance from Hope and Liam, out of respect for what happened to Beth. Steffy probably never thought her adoption of Phoebe would be good for Hope, but it seems that Hope will enjoy how she feels when she’s holding Phoebe and it will bring her peace.