The Bold and the Beautiful Spoilers: Hope Blames Herself When Steffy Leaves Town with the Girls – Marriage to Liam Crumbles 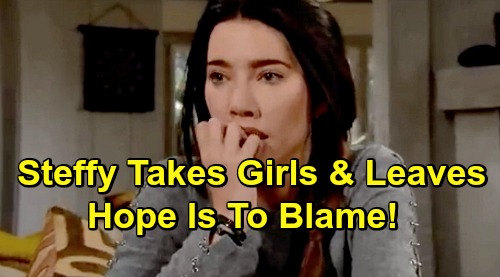 Of course, Liam has promised to stand by Hope. He believes he can support his wife as well as Steffy and the kids. However, it may be tough for Hope to give up on this B&B “Steam” reunion. Now that Hope has met Florence “Flo” Fulton (Katrina Bowden), her “Phoebe” obsession could get even worse.

Hope may feel like since Flo has given this wonderful gift, it’s just another reason why she shouldn’t stand in Liam and Steffy’s way. She could easily push them to reunite again, which could be what prompt Steffy’s bombshell next week. The Bold and the Beautiful spoilers say a serious decision’s coming up that will affect several lives.

Steffy may see that if she hangs around with the babies, it’ll just fuel this obsession of Hope’s. She would clearly like to get back together with Liam, but that’s not what any of them need at the moment. Hope needs to lean on her husband, who suffered the same traumatic loss she’s been dealing with. It would only cause more pain to watch Steffy and Liam move on as a family with the girls.

Steffy might understand that, even if Hope can’t. She could opt to take herself out of the equation for now and hope the choice pays off. Unfortunately, there’s just not a good solution here. Hope may end up feeling guiltier than ever soon. Once Steffy presumably decides to leave town for a while, Liam will be spending even less time with Kelly and “Phoebe.” Hope might feel like it’s all her fault.

The Bold and the Beautiful spoilers say Liam and Hope will face marriage woes in the coming months. It won’t matter that Steffy’s not around. Things are just too fragile due to Beth Spencer’s “death,” so this relationship could slowly crumble.