The Bold and the Beautiful Spoilers: Thursday, March 7 – Dinner Party Brings Shockers For Flo, Guilty Baby Swapper Says Too Much

BY hellodrdavis on March 6, 2019 | Comments: one comment
Related : Soap Opera, Spoiler, Television, The Bold and the Beautiful 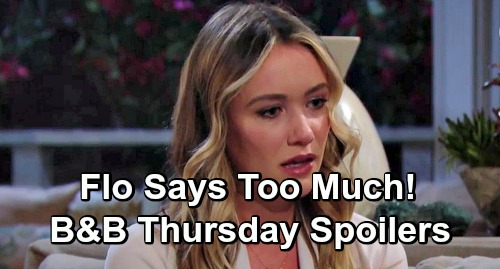 The Bold and the Beautiful spoilers for Thursday, March 7, tease that Florence “Flo” Fulton (Katrina Bowden) will be in for quite a surprise. Flo will show up at Wyatt Spencer’s (Darin Brooks) place for a dinner party to meet Sally Spectra (Courtney Hope) and Wyatt’s brother and sister-in-law. But little does Flo know that this brother and sister-in-law will be Phoebe Forrester’s (Isabella de Armas and Redford Prindiville) actual birth parents.

Flo will be stunned to see Hope Spencer (Annika Noelle) again, and even more stunned to realize how connected she actually is to Phoebe’s birth parents. Of course, Hope’s under the belief that Flo is Phoebe’s birth mom, and she’ll promptly introduce Flo to Liam Spencer (Scott Clifton). It will be all just another big coincidence to Hope and Liam.

Wyatt will be surprised, too, to learn that his former flame ended up becoming the birth mom for Steffy Forrester’s (Jacqueline MacInnes Wood) new baby. It will make for some interesting conversation and uncomfortable tension as everyone starts to understand just how Flo strangely fits into their lives.

And for Flo, the evening will be filled with angst, as she feels guiltier and guiltier about her role in Reese Buckingham’s (Wayne Brady) baby switch and adoption scam. Flo feels terrible to think that Hope and Liam believe that they lost their baby, and the reality of what she and Reese did will really sink in. Her guilt will become unbearable as the evening progresses.

Meanwhile, on the new B&B episode on Thursday, March 7, things will really heat up between Zoe Buckingham (Kiara Barnes) and Xander Avant (Adain Bradley). They’ll spend a romantic and passionate evening together, as Zoe takes some time off from worrying about reigning in Flo and keeping her dad out of jail.

Zoe and Xander will thoroughly enjoy each other’s company and talk about how much better they are together than apart. These two have really come a long way in the past few months and seem to have a great relationship going. But of course Zoe has a big secret from Xander. He doesn’t know about Reese’s baby swap and adoption scam, so he’s in the dark about Phoebe really being Beth.

One wonders what Xander will do once he finds out that Zoe’s in the loop about Reese’s and Flo’s actions and is keeping the secret. Given that Zoe and Xander seem over-the-top happy right now, it probably means that there will be trouble in paradise once the truth comes out. But for the time being, the pair will celebrate their love.