The Bold and the Beautiful Spoilers: New Bill Shooter Shocker Revealed – Thomas Is the Culprit in Stunning Twist? 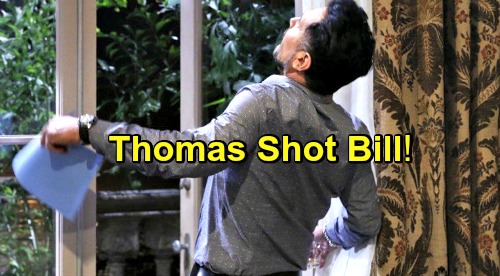 The Bold and the Beautiful (B&B) spoilers tease that the baby swap storyline won’t be resolved anytime soon. Dr. Reese Buckingham (Wayne Brady) switched Hope Spencer’s (Annika Noelle) healthy daughter for another woman’s dead child, but Hope will remain in the dark for now. Steffy Forrester (Jacqueline MacInnes Wood) will also head off screen thanks to her portrayer’s maternity leave.

However, there’ll be other reasons for Thomas’ comeback as well. Atkinson previously played Austin Travers on The Young and the Restless, but now he’s taking over as Thomas. Of course, this new face will bring familiar drama. B&B will stir up some old issues for Thomas, who’ll return with Douglas during the week of March 11-15.

Let’s consider a few clues from Atkinson’s recent interview with Soap Opera Digest. For starters, he talked about what officially brings Thomas home. “Thomas is back to visit with his family,” Atkinson said. “Especially now that his mom is in town, too.” Could that be a subtle hint about a story involving Thomas and Dr. Taylor Hayes (Hunter Tylo)?

Since The Bold and the Beautiful will shift in other directions while Steffy’s gone, perhaps it’s time to revisit Bill Spencer’s (Don Diamont) shooter storyline. It always felt like that wasn’t quite resolved. What if Thomas is the one who actually shot Bill? Could Taylor be covering for her son or has her mind simply convinced her she did the deed?

False memories certainly wouldn’t be out of the question in a traumatic situation like that. Thomas may have no idea what his mom’s been going through because of him. If he’s the shooter, that could spark a new phase of the story and really shake things up.

Back when that mystery was going on, B&B viewers briefly wondered if Caroline Spencer (Linsey Godfrey) might’ve shot Bill. He roped Caroline into faking a terminal illness so Thomas would reunite with her and dump Sally. Thomas was furious when he found out and naturally turned against Caroline. Perhaps he sought revenge on Bill in the aftermath. Anything is possible in a storyline like this.

Thomas later worked things out with Caroline, but he’ll be back on his own this time. It sounds like Caroline and Thomas could be having issues all over again. Maybe that’ll stir up some old feelings of resentment toward Bill. If Thomas sees Wyatt and Sally living such a happy life together, he could ache for what he’s lost. It’d be a great way to tie the shooter shocker back in.