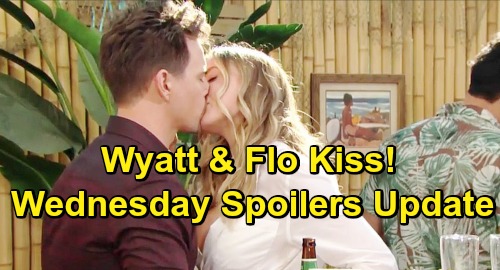 The Bold and the Beautiful (B&B) spoilers for Wednesday, March 6, tease that Wyatt Spencer (Darin Brooks) will catch up with a former flame. He just bumped into Florence “Flo” Fulton (Katrina Bowden) at Bikini Bar, so they’ll both express surprise over this encounter. They never expected to see each other in Los Angeles, but these high school sweethearts certainly won’t mind.

B&B fans will hear Wyatt and Flo to discuss their love story, which ended in despair when Wyatt left without warning. He wasn’t able to say goodbye, so Flo may wonder what happened. The Bold and the Beautiful spoilers say Wyatt will apologize for that, but he’s not actually responsible. His mom, Quinn Forrester (Rena Sofer), left him with no choice but to leave immediately.

Once Wyatt and Flo find closure with their past, they can focus on the future. Of course, that conversation should put Flo in risky territory! She posed as “Phoebe Forrester’s” (Isabella de Armas and Redford Prindiville) birth mother to help Dr. Reese Buckingham (Wayne Brady), but she won’t fill Wyatt in on that just yet. Flo will sidestep the “Phoebe” issue for now, but you can bet it’ll make waves later.

Wyatt will stir up old feelings for Flo during this chat, so expect Flo to plant a kiss on him. He should let Flo know he’s in a committed relationship with Sally Spectra (Courtney Hope), but old feelings will inevitably get stirred up for him, too. As a result, it sounds like things will get even more complicated in the baby saga!

Meanwhile, Liam Spencer (Scott Clifton) will sense trouble. The Bold and the Beautiful spoilers say Hope Spencer (Annika Noelle) will gush about meeting “Phoebe’s” birth mom. She’ll fill Liam in on how everything went down with Flo, including Zoe Buckingham’s (Kiara Barnes) role in the conversation. Hope will feel so fortunate to have met and bonded with such a special lady.

However, Liam will think there are some red flags here. Something will seem weird about this whole interaction, so he’ll likely urge Hope to be cautious. Liam won’t know if he trusts Flo or even Zoe for that matter. He’ll worry about why Flo’s hanging around LA and apparently cozying up to Hope.

Liam may fear that Flo will try to cause issues for Steffy Forrester (Jacqueline MacInnes Wood), who believes she adopted this baby legally. Naturally, Hope will assure Liam that Flo’s not trying to pull anything. She won’t view Flo as a threat, but Liam will remain on edge.