BY Heather Hughes on March 8, 2019 | Comments: one comment
Related : Soap Opera, Spoiler, Television, The Bold and the Beautiful 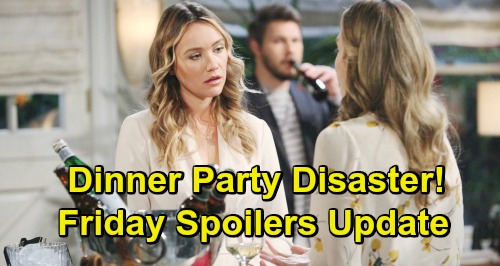 The Bold and the Beautiful (B&B) spoilers for Friday, March 8, tease that Dr. Taylor Hayes (Hunter Tylo) will have some advice for her daughter. Steffy Forrester (Jacqueline MacInnes Wood) is on cloud nine with the girls right now, but things could be even better. At least that’s what Taylor will think when Steffy reveals that Hope Spencer (Annika Noelle) pushed for a “Steam” reunion.

Taylor knows Steffy has lingering feelings for Liam Spencer (Scott Clifton), so she’ll think Hope had the right idea. She’ll get that it’s complicated, but she certainly won’t want Steffy to pass up this chance. Taylor will feel like Liam, Steffy, Kelly Spencer (Zoe Pennington and Chloe Teperman) and “Phoebe Forrester” (Isabella de Armas and Redford Prindville) should all be a family.

Steffy may argue that they already are one – and Hope’s part of the fam, too. She’ll insist that Liam wants to concentrate on helping Hope heal. Steffy will note that Liam’s place is with his wife, but Taylor won’t give up. She’ll believe Hope understands that the girls have to come first, so Liam and Steffy need to understand that as well. Taylor will pressure Steffy to consider what this would mean for her future.

At Wyatt Spencer’s (Darin Brooks) dinner party, we’ll see confusion as Florence “Flo” Fulton (Katrina Bowden) hesitates. Hope could sense that Flo had something she wanted to tell them. She offered gentle encouragement, so Flo’s prepared to make a major “Phoebe” confession.

However, this hot plot is far from over. Flo can’t come clean and stop this B&B storyline just yet, so she’ll chicken out and provide a different excuse. The Bold and the Beautiful spoilers say Flo will cover her mistake enough to appease Hope, but what about the others? There’ll be some suspicions among the other party guests, especially Liam and Wyatt.

Flo will keep her role in the baby scheme under wraps for now, but she’s playing with fire. By getting close to Hope and the others, Flo’s only creating more drama for herself. Next week, Zoe Buckingham (Kiara Barnes) won’t be pleased when she finds out about this little gathering!