BY hellodrdavis on March 12, 2019 | Comments: one comment
Related : Soap Opera, Spoiler, Television, The Bold and the Beautiful 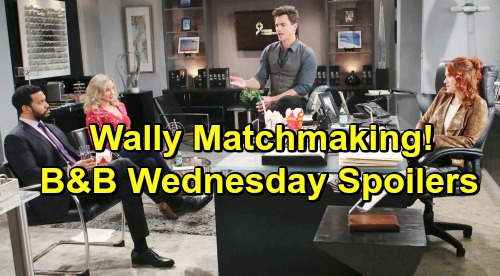 The Bold and the Beautiful spoilers for Wednesday, March 13, tease that Steffy Forrester (Jacqueline MacInnes Wood) will make a big decision about her future. She’ll decide to pack her bags and head to Paris with Kelly Spencer (Chloe Teperman and Zoe Pennington) and Phoebe Forrester (Isabella de Armas and Redford Prindiville). She’ll want to remove herself and the girls from Liam Spencer (Scott Clifton) and Hope Spencer’s (Annika Noelle) life for a little while.

Steffy feels that Hope and Liam need some time to work on their marriage and deal with their grief together, without the added distraction of herself and the girls. Hope’s been having a really difficult time dealing with her grief, and she’s been getting a bit obsessed with Phoebe. Plus, Hope is of the belief that Steffy and Liam should reunite, which is something that neither Steffy or Liam want.

So, Steffy will make her intentions known to Hope and Liam. She’ll need to run her plan by Liam to make sure he’s ok with her taking Kelly out of the country, and it looks like Liam will reluctantly agree. But both Liam and Hope will be stunned by Steffy’s plans. It will definitely take some getting used to on their part.

Meanwhile, on the new episode of B&B on Wednesday, March 13, Donna Logan (Jennifer Gareis) and Justin Barber (Aaron D. Spears) will decide that they need a little assistance in their matchmaking plan. These two want to bring Bill Spencer (Don Diamont) and Katie Logan (Heather Tom) together again, but they’ll need some help.

On Wednesday’s episode, Donna and Justin will sit down with Wyatt Spencer (Darin Brooks) and Sally Spectra (Courtney Hope) in the hopes of recruiting them to be co-matchmakers. This might be a little awkward at first, given that Katie and Wyatt were an item not so long ago, but it looks like with a little convincing, Wyatt and Sally will get on board.

It will be interesting to see what this quad’s first plan of attack will be as they play matchmaker to Bill and Katie, but it looks like it will involve getting “Batie” together for a lunch at Il Giardino, which will take place later this week. We’ll see just how long it takes for Bill and Katie to figure out that others are working behind the scenes to bring them together.