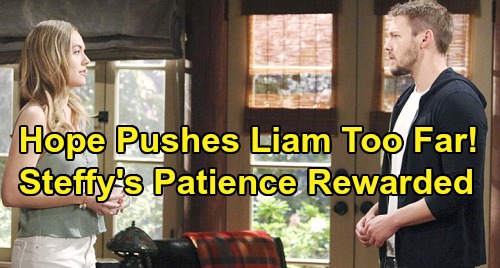 The Bold and the Beautiful (B&B) spoilers tease that Hope Logan (Annika Noelle) and Liam Spencer (Scott Clifton) have some relationship struggles in their future. Things have been pretty pleasant for this duo since they found out the truth about Beth Spencer (River Davidson and Madeline Valdez). However, Liam is venturing out of his blissful bubble now and truly seeing the extent of Steffy Forrester’s (Jacqueline MacInnes Wood) pain.

That feels like step one toward an eventual “Steam” reunion. However, it may be Hope who does the most damage to “Lope.” Her jealousy and doubts are bound to spell trouble. The Bold and the Beautiful spoilers say insecurity won’t be a good look for Hope. It’ll probably only make Steffy seem more appealing in Liam’s eyes.

Then, Hope’s pushy nature will take over. She’s certainly got some good qualities or else Liam wouldn’t have fallen in love with her. Nevertheless, Hope is her mother’s daughter! B&B fans know it’s Brooke Forrester’s (Katherine Kelly Lang) way or the highway. Hope will take a similar stance on some upcoming issues. She’ll try to pressure Liam into doing things he’s uncomfortable with.

The Bold and the Beautiful spoilers say Hope will demand that Liam set Steffy straight. She’ll feel like Steffy’s just biding her time until “Lope” falls apart. Hope will think Liam’s waiting for an opportunity that’ll never come. She’ll want Liam to make it clear to Steffy that envisioning a future with him is pointless. Hope will want Steffy to know she’s the one and only woman in Liam’s heart.

The problem is that’s just not true! It never has been and it never will be if B&B sticks with the Liam we know. Hope’s efforts to shut down Liam and Steffy’s connection could backfire. The more she tries to come between them, the harder Liam may fight to keep their bond alive. It’s important for Kelly Spencer’s (Zoe Pennington) anyway.

Hope will also push Liam to open their home to Douglas Forrester (Henry Joseph Samiri) permanently. That’ll spark a disagreement, but Hope will fight for what she wants. It sounds like Liam won’t be very keen on the idea, but Hope will insist on it.

Will Liam Spencer Ultimately Decide Hope Logan Is Too Difficult?

After her plan with Brooke doesn’t play out the way she wants, Hope will ignore Liam’s advice and confront Thomas Forrester (Matthew Atkinson) at the Halloween party. She’ll be lobbying for joint custody by then while Liam spends his evening with Steffy and the girls. The writing is shifting here and it’s feeding Hope’s controlling side.

Will Liam ultimately decide Hope’s become too difficult? Will Hope push Liam to his breaking point and bring “Lope” to an abrupt end? The Bold and the Beautiful spoilers say Steffy may just have to sit back and watch Liam’s current relationship implode! Perhaps her patience will pay off down the road.