BY Heather Hughes on October 22, 2019 | Comments: one comment
Related : Soap Opera, Spoiler, Television, The Bold and the Beautiful 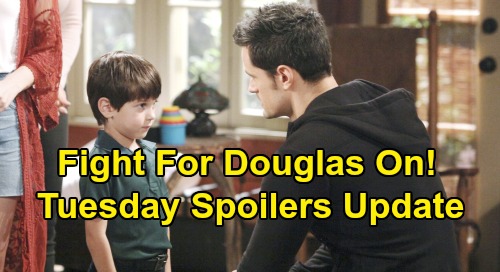 The Bold and the Beautiful (B&B) spoilers update for Tuesday, October 22, teases that Liam Spencer (Scott Clifton) will hear Hope Logan’s (Annika Noelle) pitch. Hope will feel like it’s time to consider a more permanent arrangement for Douglas Forrester (Henry Joseph Samiri). She’ll push Liam to give Douglas a forever home and make sure he grows up with loving parents who’ll support him.

Thomas Forrester (Matthew Atkinson) definitely has a dark side, which Liam and Hope have seen first-hand. They both know what Thomas is capable of, so Hope should remind Liam of that on Tuesday. She’ll also point out how much Douglas loves being part of their family. Hope will feel like it’ll be in everyone’s best interest if they raise Douglas, but Thomas obviously isn’t going to agree.

Liam will have some concerns about Hope’s plan. The Bold and the Beautiful spoilers say Hope will explain how she hopes to push Thomas into this, but Liam will worry it could backfire. Thomas is naturally going to fight for his son. Douglas could get caught in the middle of the conflict, so Liam may argue that they have to be careful.

Taking a boy from his father is a huge step, so they need to be absolutely sure this is the right call. It’s a decision that needs to be given some serious thought. Unfortunately, Hope will be ready to make her move now. Brooke Forrester (Katherine Kelly Lang) will be just as determined to support Hope and keep Thomas as far away from Douglas as possible.

Over with Thomas, he’ll get a clue about the plot that’s brewing. Thomas will realize Hope intends to steal his son from him with Brooke’s help. B&B spoilers say Thomas will race over to confront the mother-daughter duo. He’ll want to unleash his wrath and make it crystal clear that he’s not giving up Douglas.

Thomas, Brooke and Hope won’t be the only ones involved in this fierce argument. Liam and Ridge Forrester (Thorsten Kaye) will also speak their minds later this week. The Bold and the Beautiful spoilers say some exciting scenes are on the way. We’ll give you updates as other B&B news comes in. Stay tuned to the CBS soap and don’t forget to check CDL often for the latest Bold and the Beautiful spoilers, updates and news.