The Bold and the Beautiful Spoilers: Custody Battle Heats Up – Will Douglas Turn On Thomas? 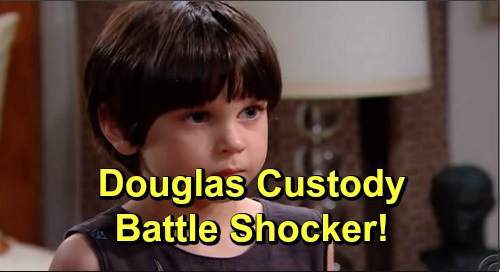 The Bold and the Beautiful spoilers tease that Douglas Forrester (Henry Joseph Samiri) may soon be put in a terrible position. He’s currently living at the mansion with Brooke Forrester (Katherine Kelly Lang), where he has his own room, but he’s been spending most of his time in the cabin with Hope Logan (Annika Noelle) and Liam Spencer (Scott Clifton). As B&B viewers know, his father has been largely absent from his life since the whole debacle with Beth Spencer (River Davidson and Madeline Valdez) blew up.

So far, Douglas seems like a happy little boy who is thriving in his new environment with Hope and Liam. That’s great to see, since Thomas Forrester (Matthew Atkinson) just isn’t in the right frame of mind to take care of Douglas right now. In fact, watching Thomas with Douglas on the occasions they interact is a bit painful, since Thomas insists on berating Douglas about ratting him out about Beth to Hope and Liam.

Of course, this is totally inappropriate on Thomas’ part, since Douglas is a little kid and was just doing the right thing when he spilled the beans about Beth. Thomas’ treatment of Douglas really became a renewed issue after Thomas visited Douglas the last time. Douglas wound up with physical symptoms of anxiety and had to come home early from a play date. That was about the last straw for Hope and Liam, who decided to take action to keep Thomas away from Douglas.

And that likely means that we’re looking at a custody battle over Douglas in the near future. Brooke, Hope, and Liam seem adamant that Thomas should not be anywhere near Douglas, and Hope and Liam could take steps to seek physical custody of the boy. If that happens, then of course Hope and Liam will think that they’re doing the right thing, but what effect will it have on Douglas going forward?

Of course, one possibility is that Douglas remains oblivious to the whole thing and everyone does a good job of keeping him out of the drama. The only problem with that is that Douglas is a pretty perceptive little guy, and he picks up on things quickly. He’s keenly aware that Thomas is irritated with him for telling the Beth secret, yet he knows that he did the right thing by telling. So, how long will it be until Douglas turns on his father?

Could we even see a situation in which Douglas has to go to court and talk to the judge about where he wants to live? If that’s the case, Douglas could turn on Thomas, and might even voice his opinion that he no longer wants to live with his father. That would be a startling turn of events and would probably serve to make Thomas even madder at Liam and Hope than he already is.

It will be interesting to see what happens here, but hopefully things will get straightened out without causing Douglas any more turmoil. Do you think that Douglas will eventually turn against his father? Stay tuned to the CBS soap and don’t forget to check CDL often for the latest Bold and the Beautiful spoilers, updates, and news.