The Bold and the Beautiful Spoilers: Liam Reestablishes Bond With Kelly – Hope’s Jealousy of Steffy Spirals Out Of Control

BY hellodrdavis on October 9, 2019 | Comments: 4 comments
Related : Soap Opera, Spoiler, Television, The Bold and the Beautiful 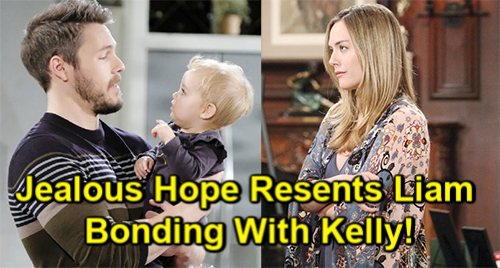 The Bold and the Beautiful spoilers tease that Liam Spencer (Scott Clifton) will need to step up soon. As B&B viewers know, Liam seems to be spending most of his time these days with Hope Logan (Annika Noelle) and Beth Spencer (River Davidson and Madeline Valdez) in the cabin. He’s been spending quite a bit of time with Douglas Forrester (Henry Joseph Samiri), too, since Douglas is without his father.

But many B&B fans have been wondering exactly when Liam is going to start spending time with Kelly Spencer (Chloe Teperman and Zoe Pennington) again. Granted, Liam has likely been visiting with Kelly off-screen, outside of viewers’ awareness, but it nevertheless seems that there’s been a disconnect between the amount of time he’s spent with Beth and Douglas over Kelly.

Soon, it will be time for Liam to step back into his role as an active dad to Kelly, and that will necessarily be something that puts him in close contact with Steffy Forrester (Jacqueline MacInnes Wood).

And that means that it will be time for Hope, Liam, and Steffy to finally start navigating the realities of co-parenting. After all, Lope and Beth can’t stay holed up in the cabin forever – soon they’re going to have to bring Kelly in as an active part of Beth’s life.

And that also means that Steffy is going to have to bring Beth into her home as an active part of Kelly’s life. Of course, all of this means that Liam will be playing double-duty and ping-ponging between homes to raise his daughters. It seems like that may be a big adjustment for him and Hope to make, especially since Hope tends to get the jealousy bug fairly easily.

Upcoming The Bold and the Beautiful spoilers indicate that Hope will get jealous when she spots a message from Steffy on Liam’s phone, which seems a bit odd. After all, Steffy and Liam are going to have to communicate regularly about Kelly, and they’ll likely have some friendly conversations – in other words, it won’t be all business. Does this mean that Hope is going to get her feelings hurt over Liam just doing what he needs to do to be a dad to Kelly?

Well-Being Of Kelly And Beth Should Drive Decision Making

As Liam re-establishes his bond with Kelly (and Steffy, too, in the process), will Hope’s jealousy spiral out of control? Of course, family situations like this one can be challenging, and it seems that the well-being of Kelly and Beth will have to be what drives the decision making, not the adults’ interpersonal feelings.

We’ll see what happens going forward, but if Hope’s going to become jealous over Steffy and Liam’s interactions, then there’s probably going to be some serious blended family problems going forward.

Do you think that Hope, Liam, and Steffy will be able to work out their issues and create a family situation that works? Stay tuned to the CBS soap and don’t forget to check CDL often for the latest Bold and the Beautiful spoilers, updates, and news.