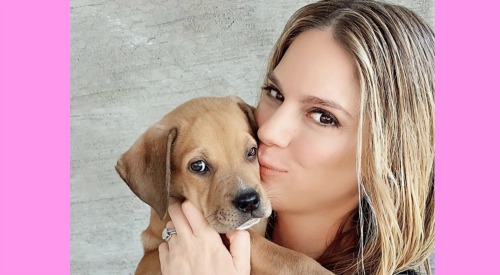 The Bold and the Beautiful spoilers has some great news to pass on about a popular real-life soap couple. Darin Brooks (Wyatt Spencer, B&B) and The Young and the Restless star Kelly Kruger (Mackenizie Browning, Y&R) may be expecting a baby in the next few weeks, but they’ve decided to make yet another addition to their family.

As CDL previously reported, Darin and Kelly recently took in an adorable little foster puppy. They shared their fostering situation with their followers, many of whom chimed in about how hard it was going to be for them to separate with the puppy when the time came to give the puppy back.

Well, in an interesting (and happily predictable) turn of events, Darin and Kelly got quickly attached to the puppy. But there was an issue – their other dog, Charlie, had some problems with the puppy, as Kelly recently reported on her Instagram feed. Apparently, the puppy nipped at Charlie’s feet and caused some turmoil.

And so the couple decided that as much as they were attached to the puppy, they’d have to let him go. But then something wonderful happened. Kelly made a subsequent announcement on Instagram that she and Darin had decided to make it work and keep the puppy that they’ve become so attached to.

Kelly posted a photo of herself with the puppy along with the following message: “I hate to ever use the word failure but in this case I’m happy to…#fosterfail. Meet Chance Brooks!! He quickly became a part of our family and it broke our hearts to let him go. He was so adjusted, loved and trusted us and we just knew we had to make it work!”

She continued: “We will be working with a trainer to curb the nipping at Charlie quickly and are giving Charlie tons and tons of extra love and attention now before the baby comes! Hopefully in time they will grow to love each other.”

Kelly’s followers have been responding in droves to her announcement, with most offering their congratulations and others indicating that they knew it would all work out in the end.

Kelly and Darin’s soap star friends have responded to the announcement as well. Jacqueline MacInnes Wood (Steffy Forrester, B&B) responded with “Omg, this makes me so happy!” and Tamara Braun (Kim Nero, GH) commented: “So happy you found a way to make it work!”

Our congratulations go out to Darin and Kelly on their new addition and we wish them luck with Chance and Charlie! Stay tuned to the CBS soap and don’t forget to check CDL often for the latest Bold and the Beautiful spoilers, updates, and news.

I hate to ever use the word failure but in this case I’m happy to…#fosterfail Meet Chance Brooks!! 🐶❤️ He quickly became a part of our family and it broke our hearts to let him go. He was so adjusted, loved and trusted us and we just knew we had to make it work! We will be working with a trainer to curb the nipping at Charlie quickly and are giving Charlie tons and tons of extra love and attention now before baby comes! Hopefully in time they will grow to love each other🤞🏻Thank you to @thelabellefoundation for going above and beyond for us. What they do is incredible guys, any way that you can help them, please do. They save so many babies and do incredible work 🙏🏻 #savethemall #puppies #adoptdontshop #ChanceBrooks @theedarinbrooks

Fostering this puppy has been a dream. He is the sweetest, smartest puppy I’ve ever been around. He’s potty trained, sleeps through the night and is great in the crate and he’s only 8 weeks old! Unfortunately though our senior Charlie has not warmed up to him at all. He nips at her arthritic legs all day, she snaps, he thinks she’s playing and it’s made her very very unhappy. We have to consider her needs as she’s been with us for 14.5 years and just lost her sister. I know Charlie is still grieving our 17 year old pug Maddy we lost a month and a half ago. As are we and having this new puppy around to care for has been helpful emotionally for us but not her. With so much to do with a baby on the way, being first time parents and knowing how much time, energy, attention and work it will be to curb the nipping and all the things that come with training a puppy, what we thought would be a foster fail unfortunately can’t be. We have some great applications in for him at @thelabellefoundation but if anyone wants to apply before we make the decision head over there and fill one out! I am helping them vet all applicants as @theedarinbrooks and I have grown very attached and love this dog so much. We want to make sure he’s going to the best possible home and hopefully we can stay in touch and watch him grow up. Comment below if you do send an application for him and tag anyone you think might be a good fit! Also any questions u might have. This is the hardest thing. Fostering saves lives and we want to save them all. Problem is we also want to keep them all!!! 🐶❤️🐶#adoptdontshop #boxermix #rescue #foster Dress by @lulus (non maternity)