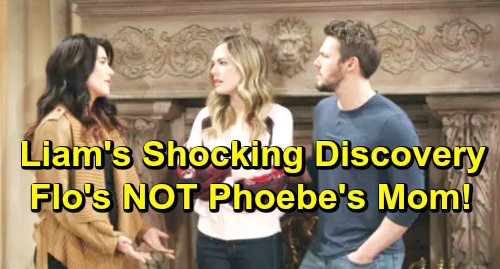 The Bold and the Beautiful (B&B) spoilers tease that Liam Spencer (Scott Clifton) will learn a shocking fact after Steffy Forrester (Jacqueline MacInnes Wood) breaks down the story of her adoption of Phoebe (River Davidson and Madeline Valdez). Liam will investigate and eventually begin to wonder about the timing of Steffy’s adoption and his own daughter’s death.

It all starts when Steffy tells Liam that her mother, Taylor Haynes’ (Hunter Tylo) friend had a friend that had to give her baby up for adoption. She was not in the place to take care of a child. B&B spoilers state that Steffy and Taylor believed Reese Buckingham (Wayne Brady) was just trying to help his friend out and give Steffy the chance at being a mother again.

Liam will examine Steffy’s adoption papers for Phoebe and do some research. That’s when he decides to look into Flo’s background. B&B spoilers say Liam calls the Las Vegas hospital that Flo supposedly delivered, according to Phoebe’s adoption papers, and they reveal a shocker. Flo never had a baby in that hospital! In fact. They have ever had a patient name Flo Fulton admitted to the hospital.

Liam is stunned. He isn’t sure what to make of it because that is the information Flo gave to Steffy during the adoption process. He begins to wonder if anything Flo told them was the truth. The Bold and the Beautiful spoilers tease that Liam calls Wyatt Spencer (Darin Brooks) and the brothers investigate Flo and the adoption together.

B&B spoilers tease that Liam is so close to finding out the truth about Phoebe being Beth. Even though he’s on the heels of finding out, he still hasn’t put two and two together about Beth. But B&B buzz suggests it won’t be too long until the truth is out that Steffy’s adopted daughter Phoebe is really his baby with grieving Hope!

Do you think Liam and Hope will reunite after the truth comes out? Will there be a legal battle over baby Beth? What will happen to Flo? Don’t forget to come back to CDL later for more The Bold and the Beautiful (B&B) spoilers, news, and casting updates!