The Bold and the Beautiful Spoilers: Heather Tom Returns to Y&R On Special Assignment – Shares Exciting News with Fans 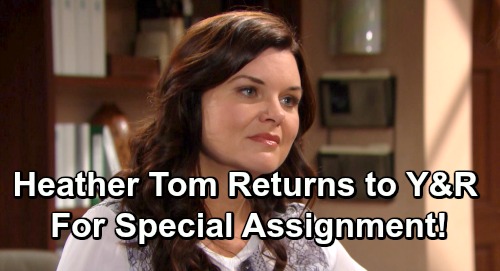 The Bold and the Beautiful (B&B) spoilers reveal that one CBS soap star recently headed back to her old soap home. However, she isn’t playing her former role! B&B viewers know Heather Tom as Katie Logan on The Bold and the Beautiful, but plenty of Young and the Restless fans also remember when she portrayed Victoria Newman in Genoa City. Tom left Y&R in 2003, but she landed at B&B in 2007.

Amelia Heinle ultimately took over as Victoria and made the role her own, but that doesn’t mean there isn’t a place for Tom at Y&R. Last week, she returned to The Young and the Restless for a job other than acting. Tom was given a chance to direct an episode that was taped on June 13 and will air on July 17. She was overwhelmed with gratitude when she shared the big news on Instagram.

Tom posted a pic of her script cover along with a caption that said, “Oh and then this happened last week! So grateful for the opportunity! Thanks especially to @angelica_mcd @cbsdaytime #tonymorino @youngandrestlesscbs @sptv and all the actors I had the pleasure to work with. Such an extraordinary amount of talented people! It was so emotional for me!”

Tom followed that tweet up with another one to post a better pic and clarify that she was the director that day. She didn’t want any confusion since fans can sometimes get excited and face a letdown. Although Tom seems content to stick around as Katie, directing has become a nice side gig her. Tom has served as director on some B&B episodes and several other fun projects in her spare time.

As for what’s next in the fictional version of Los Angeles, The Bold and the Beautiful spoilers say Katie and Bill Spencer’s (Don Diamont) bond will grow stronger. They’ll head down the aisle if all goes well, so that’s something to look forward to. Of course, B&B viewers will be waiting to find out when Bill will inevitably screw up. “Dollar Bill” can never stay away from the dark side for too long!

Hello! I just posted a script cover on Instagram! Just to be clear- I’m directing y&r -not acting!!!!