BY hellodrdavis on June 17, 2019 | Comments: 2 comments
Related : Soap Opera, Spoiler, Television, The Bold and the Beautiful 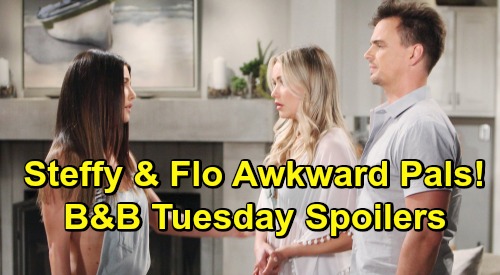 The Bold and the Beautiful spoilers for Tuesday, June 18, tease that Hope Logan (Annika Noelle) will be put in an awkward position. She’s just ended her marriage to Liam Spencer (Scott Clifton) and is feeling sad and reflective about it, while at the same time she has Thomas Forrester (Matthew Atkinson) hovering over her and pursuing her romantically.

As B&B viewers know, Thomas is obsessed with Hope, and his obsession is growing by the day. In fact, it’s getting so obvious that Brooke Forrester (Katherine Kelly Lang) has noticed the situation. Brooke recently warned Hope about Thomas’ intense and unsettling behavior, but Hope didn’t seem too worried about it.

As far as Hope’s concerned, Thomas is only concerned about his young son Douglas Forrester (Henry Joseph Samiri) and wants Hope to be a part of Douglas’ life. But B&B viewers know that Thomas is really after Hope for himself, and he’s like nothing more than to turn her into the next Mrs. Thomas Forrester as soon as possible.

Well, on Tuesday’s episode of B&B, Thomas will get a bit carried away. He’ll decide to show Hope how much she means to him by offering her a generous gift…a very expensive Forrester Original design. The Bold and the Beautiful spoilers say that Hope will be shocked by the gesture, and she’ll probably think that it’s too lavish a gift. But Thomas will insist that he made the design for her, and that she should keep it.

And of course, Thomas won’t stop there. He’ll also plant a big kiss on Hope and reiterate how much he cares about her. One wonders whether Hope will now start to get a clue about Thomas’ obsession with her. Will she remember her mother’s wise words and warning about Thomas?

Meanwhile, on the new episode of B&B on Tuesday, June 18, Florence “Flo” Fulton (Katrina Bowden) will get a surprise. Wyatt Spencer (Darin Brooks) will approach her with an idea. He’ll want to take Flo over to Steffy Forrester’s (Jacqueline MacInnes Wood) house for a visit. It seems that Wyatt will think that Flo’s been too stressed about Hope and Liam’s annulment, and that she needs to go see that everything is working out for the best.

Of course, Wyatt is sad that his brother’s marriage to Hope ended, but he’ll want to show Flo that Liam’s future is on track as he and Steffy co-parent Kelly Spencer (Chloe Teperman and Zoe Pennington) and Phoebe Forrester (River Davidson and Madeline Valdez) together.

Plus, Wyatt will think that since he and Flo are dating, they should get used to being around Liam, Steffy and the girls. B&B spoilers say that Wyatt and Liam will organize a get-together between themselves, Steffy, and Flo.

But Flo won’t be so keen on the idea of spending time around Steffy and Phoebe. She’s feeling a tremendous amount of guilt over knowing that Phoebe is actually Beth Spencer. Plus, Flo probably won’t know how she’s supposed to act around Phoebe since she’s supposed to be Phoebe’s biological mother.

According to B&B spoilers, Steffy will push back against the idea, too. She’ll tell Liam that she’s not so sure it’s a great idea to invite Flo into her home to spend time around the baby she gave up for adoption. Steffy will worry that it might produce some awkward moments.

But it looks like the guys will win their respective debates, as B&B spoilers say they’ll get Flo and Steffy to agree to the get-together, and that the gathering will indeed occur later this week.