BY Kinsley Goldman on June 17, 2019 | Comments: one comment
Related : Soap Opera, Spoiler, Television, The Bold and the Beautiful 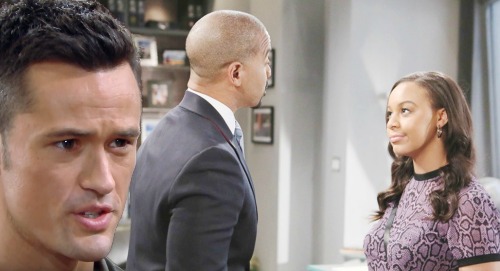 The Bold and the Beautiful (B&B) spoilers tease that Emma Barber (Nia Sioux) could find herself in a deadly situation. Someone will meet a tragic end soon, so the aftermath will send shockwaves during the week of June 24-28. Since Emma will discover the Beth Spencer shocker and face off with an irate Thomas, she could be the one who won’t survive the summer.

This would actually be an interesting way to expand the story. Emma may seem like a nobody, but we have to remember her one connection on canvas: Justin Barber (Aaron D. Spears). If Justin’s beloved niece dies under suspicious circumstances, he’s going to want some answers – and he may not buy the answers he gets.

Let’s say Emma does turn out to be the one who suffers a grim fate. Thomas would undoubtedly be the person responsible. Whether it’s inadvertent or a sinister move to silence Emma, B&B spoilers state that Thomas would find himself in a tight spot. He’d probably have to call on the others to help support a cover story.

In other words, Thomas would threaten Xander Avant (Adain Bradley), Zoe Buckingham (Kiara Barnes) and Florence “Flo” Fulton (Katrina Bowden) into backing him up. Of course, it’s possible they could try to make the body disappear and play dumb. It’s also possible they could sell the story of some freak accident, which could end up being partially true.

Even so, Justin may not believe anything Thomas and the others spew out. They’ll surely be nervous, which could work against them. Justin may pick up on the fact that they’re hiding something, and he may be determined to find out what it is. The Bold and the Beautiful spoilers say Justin might become obsessed with getting revenge and exposing his niece’s killer.

Bill Spencer (Don Diamont) is a powerful man and always appreciates Justin’s loyalty. He may have concerns as well and decide to help Justin out. Nothing’s more important than family to Bill these days. He may get why Justin’s so hung up on solving the mystery surrounding Emma’s potential death. Bill could hope to satisfy Justin’s curiosity and assist with his goal of getting justice.