BY Heather Hughes on June 17, 2019 | Comments: one comment
Related : Soap Opera, Spoiler, Television, The Bold and the Beautiful 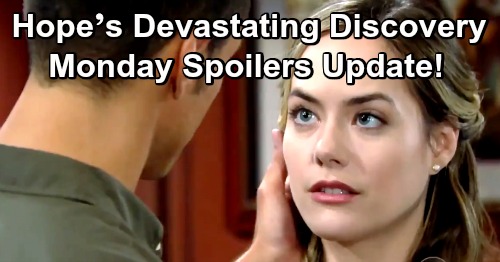 The Bold and the Beautiful (B&B) spoilers update for Monday, June 17, tease that Hope Spencer (Annika Noelle) will make a devastating discovery. Thomas Forrester (Matthew Atkinson) caught Hope checking out the new pics Liam Spencer (Scott Clifton) sent and quickly warned her to put the phone down. Hope tried to insist they brought her joy instead of pain, but that’s obviously not the whole truth.

Although Hope wanted Liam to be a family with Steffy Forrester (Jacqueline MacInnes Wood) and the girls, it doesn’t make it any less difficult to be without him. Thomas feels like Hope’s only making things harder by dwelling on the “Steam” fam. That’s why he decided to help Hope distance herself from Liam, Kelly Spencer (Zoe Pennington and Chloe Teperman) and especially “Phoebe Forrester” (River Davidson and Madeline Valdez).

Now that Thomas has deleted that adorable photo of “Phoebe” aka Beth Spencer, it’ll bring an emotional meltdown for Hope. She’ll be crushed when she realizes the pic is gone. Of course, this is kind of a silly plot point if we’re being honest. Hope could call Liam up and ask him to send it again if she wanted. Liam could even make a thousand more photos of “Phoebe” and pass them along.

However, Hope’s not in the best frame of mind right now. She may view this lost picture as a sign that she’s not supposed to stay connected – at least once Thomas leads her in that direction. He may urge Hope to see that she has to build her own life while Liam builds his new one. Thomas would love to get started on their future as a family, so he’ll plant another kiss to move the process along.

The Bold and the Beautiful spoilers say Hope will be uncomfortable with Thomas’ advances. He’s being far too pushy with all these lip locks. Naturally, Thomas won’t let Hope’s reaction deter him. B&B fans know Hope’s expressed discomfort before and that’s never stopped Thomas from pursuing her.

Thomas will likely just shift his strategy back to what he knows will work: Douglas Forrester (Henry Joseph Samiri). Hope’s crazy about that little boy and likes to feel needed. As Thomas continues to use Douglas in his scheme, Brooke Forrester (Katherine Kelly Lang) will be deeply disturbed. Thomas is exploiting his own son as a pawn to win Hope over, so Brooke will find that appalling.

Nevertheless, The Bold and the Beautiful spoilers say Thomas will keep doing whatever he has to do. He won’t care about anything except making Hope fall for him, but the Beth bomb should destroy any love he manages to create. We’ll give you updates as other B&B news comes in. Stick with the CBS soap and don’t forget to check CDL often for the latest Bold and the Beautiful spoilers, updates and news.