The Bold and the Beautiful Spoilers: Sally Tells Wyatt About Thomas’ Evil Plan – Liam Rushes Home To Save Marriage

BY hellodrdavis on April 28, 2019 | Comments: 2 comments
Related : Soap Opera, Spoiler, Television, The Bold and the Beautiful 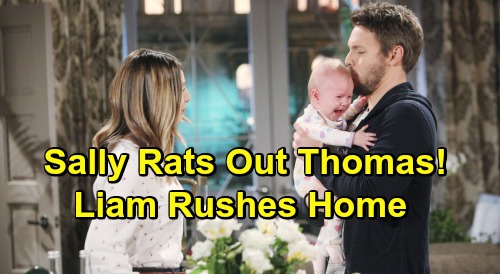 The Bold and the Beautiful spoilers tease that Thomas Forrester (Matthew Atkinson) will only get so far with his devious plan. He’s determined to break up Hope Spencer (Annika Noelle) and Liam Spencer (Scott Clifton) so he can have Hope all to himself.

He’d like nothing more than for Hope to become a permanent mother figure to Douglas Forrester (Henry Joseph Samiri), and he’s willing to go to great lengths to make that happen.

So far, Thomas’ plan has been working well. He’s managed to tug at Hope’s heartstrings by using Douglas to draw her in. And he succeeded in getting Hope to send Liam off to Paris to visit Steffy Forrester (Jacqueline MacInnes Wood) and the girls by making Hope feel guilty about keeping Liam away from Kelly Spencer (Chloe Teperman and Zoe Pennington).

But Thomas did make one big mistake. He told Sally Spectra (Courtney Hope) about his plans to bust up Lope’s marriage. Of course, he swore Sally to secrecy, but that will turn out to be a dumb move. For the most part, Sally has a strong moral compass, and she didn’t like the sound of Thomas’ plan. She tried to dissuade him from the idea, but Thomas was determined.

Well, according to B&B spoilers, Sally will soon be backed into a corner. Sure, she promised Thomas that she would keep quiet about his plans, but some developments will occur with Wyatt Spencer (Darin Brooks) that will make her break her promise.

The Bold and the Beautiful spoilers say that Wyatt will have a fit when he realizes that Sally is keeping a secret with Thomas. He’ll jump to the wrong conclusion and fear that Sally and Thomas are having an affair, and Sally will be torn about whether she should tell Wyatt the truth. Eventually, she’ll come clean, and Wyatt will be stunned.

Of course, Thomas’ plan to break up Lope directly impacts Wyatt’s brother Liam, and so Wyatt will be horrified. Not only will the revelation cause a serious rift between Wyatt and Sally, it will make Wyatt want to get in touch with his brother asap. Since B&B spoilers say that Liam will race back to Los Angeles to save Hope from Thomas’ scheme, it looks like Wyatt will spill the whole plot to Liam.

Of course, Liam will be livid about the whole thing, and he’ll likely have some strong words for Thomas when he gets home. But most of all, he’ll be concerned about Hope, who is very vulnerable right now. Who knows what kind of frame of mind Hope will be in when he arrives, especially since Thomas will have continued to push Hope to let Liam go while Liam was away.

It should be an interesting scene when Liam returns. Expect some serious conflict between Liam and Thomas, as well as between Wyatt and Sally. After all, Wyatt will probably be horrified that Sally didn’t come to him the minute she learned about Thomas’ plot to break up Lope.

Do you think Liam will get home in time to repair the damage that Thomas did while he was away? Stay tuned to the CBS soap and don’t forget to check CDL often for the latest Bold and the Beautiful spoilers, updates, and news.