BY Heather Hughes on April 28, 2019 | Comments: one comment
Related : Soap Opera, Spoiler, Television, The Bold and the Beautiful 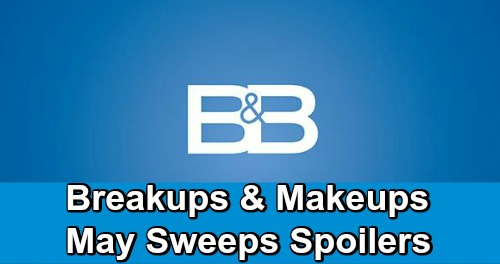 The Bold and the Beautiful (B&B) spoilers tease that the drama will heat up during May sweeps. Several characters will find themselves in tricky situations while others carry out their sneaky agendas. We’ve got a preview of the hot stories ahead, so let’s take a look at all the action.

For starters, Liam Spencer’s (Scott Clifton) marriage to Hope Spencer (Annika Noelle) will take more hits. Liam will remain committed for now, but Thomas Forrester’s (Matthew Atkinson) meddling will cause problems. Thomas will do everything he can to make waves for Hope and Liam in the coming weeks. He’ll hope to create some conflict in their relationship and swoop in to steal Hope’s heart.

Over with Florence “Flo” Fulton (Katrina Bowden), guilt will continue to be a big issue for her. The closer Flo gets to her new family, the worse she’ll feel about what she’s hiding. Flo and Hope’s bond will grow stronger, which will make keeping her cousin out of the loop even more difficult.

As the pressure rises, Flo will need Shauna Fulton (Denise Richards) and Zoe Buckingham (Kiara Barnes) to keep her in line. While Zoe faces some pressure of her own from Xander Avant (Adain Bradley), Shauna will juggle other projects. She’ll be glad Flo’s found herself an influential family with lots of opportunities, but she’ll want to create her own successful path.

Shauna will keep her options open by spending plenty of time with both Bill Spencer (Don Diamont) and Ridge Forrester (Thorsten Kaye). Katie Logan (Heather Tom) and Brooke Forrester (Katherine Kelly Lang) will have to keep an eye on Shauna as well as the men in their lives. Shauna could prove to be a serious threat!

Other Bold and the Beautiful spoilers say Wyatt Spencer (Darin Brooks) will uncover a stunning secret. It looks like he’ll learn Sally Spectra (Courtney Hope) knew about Thomas’ plan and kept quiet. B&B fans know Thomas is plotting to destroy Liam and Hope’s marriage. Wyatt certainly won’t be happy about his brother and ex being manipulated, especially when they’re still in such a fragile place.

The fact that Sally would be complicit in something like this will truly concern Wyatt. It’ll leave their romance in jeopardy, which will fill Flo with both hope and terror. She’ll be thrilled at the thought of a second chance with Wyatt, but she’ll also know her own secret is a million times worse than Sally’s. If Wyatt can’t get past Sally’s mild deception, how could he ever forgive the baby swap?