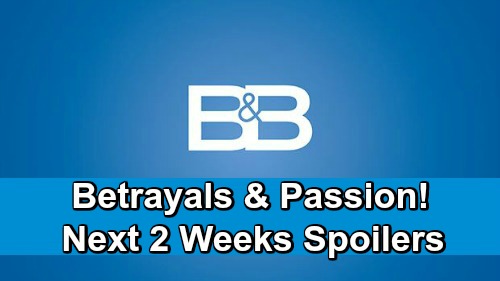 The Bold and the Beautiful (B&B) spoilers for the next two weeks tease that we’ll see some sneaky moves and warm moments. During the week of April 29-May 3, Thomas Forrester (Matthew Atkinson) will keep up his efforts to win Hope Spencer (Darin Brooks) for himself. He’ll be behind Brooke Forrester (Katherine Kelly Lang) 100 percent when she urges Hope to come live at the main house.

While Liam Spencer (Scott Clifton) is off spending time with Steffy Forrester (Jacqueline MacInnes Wood) and the girls, Thomas will push Hope to cut him loose. Of course, Thomas won’t tell Hope it’s because he wants her for himself. He’ll simply argue that Hope has to do the kind thing and let Liam go. Thomas will feel like Hope needs to do what’s best for Liam’s family.

Hope will also battle horrible memories during a power outage at Forrester Creations. Her mind will take her back to the night her baby girl “died.” As Hope reflects on missing Beth Spencer, she’ll tell Thomas she misses “Phoebe Forrester” (Isabella de Armas and Rosalind Aune) most out of the Paris crew. She’ll think Florence “Flo” Fulton’s (Katrina Bowden) blood tie to “Phoebe” is why they feel so connected.

However, Flo isn’t really the birth mother and she’ll remain desperate to tell Hope that. B&B spoilers say Hope will interrupt Flo’s confession attempt with a job offer, so she’ll be thwarted once again. Later, Ridge Forrester (Thorsten Kaye) will inadvertently add to Flo’s growing remorse. It looks like he’ll be kind to her as she ponders whether she should really work at Forrester Creations.

As for Shauna Fulton (Denise Richards), she’ll be sold on Flo having a life like she’s never dreamed of. Shauna will try to get in on this wealthy party, too. When a shot at wearing a Forrester original comes up, Shauna will snatch it up quickly. She’ll become quite fascinated by Ridge and his talent, but she won’t entirely push Bill Spencer (Don Diamont) out of her mind either.

Back with Thomas, The Bold and the Beautiful spoilers say he’ll manipulate Douglas Forrester (Henry Joseph Samiri) into helping him woo Hope. Xander Avant (Adain Bradley) will also sense that something’s troubling Zoe Buckingham (Kiara Barnes), so he’ll encourage her to break down all these walls. He’ll pressure Zoe to trust him and reveal whatever she’s keeping from him.

Zoe will have to decide if she’s going to unload her baby swap problems on Xander or keep the news to herself. Next, Sally Spectra’s (Courtney Hope) secrecy surrounding Thomas will drive Wyatt Spencer (Darin Brooks) right into Flo’s arms. Wyatt and Flo will kiss before they make plans to have dinner one night, so Wyatt’s betrayal should be a tough blow once it’s ultimately discovered.

The week of May 6-10 will deliver another round of hot drama. Sally will make a startling admission, which will likely involve the truth about what Thomas is up to. She’ll be sorry she kept quiet, but she was probably hoping Thomas would drop the idea at some point. Sally also didn’t want to rat out a friend, so she was facing a tricky dilemma.

Sally will hope her relationship with Wyatt can be salvaged, but his attraction to Flo will remain an issue. Elsewhere, Ridge will make a confession of his own. It sounds like he’ll make the same one Sally’s making and squeal on Thomas, so Brooke will hit the roof. Will she warn Hope about Thomas’ attempt to win her back?