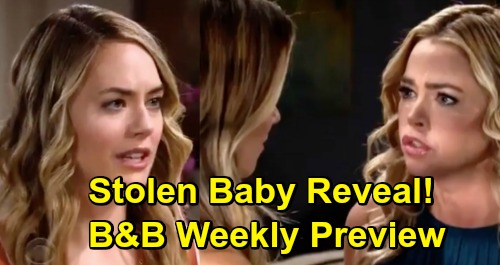 The Bold and the Beautiful (B&B) spoilers for the week of April 15-19 tease that Florence “Flo” Fulton’s (Katrina Bowden) jam will get even worse. If she thought the pressure was bad before, she hasn’t seen anything yet! Once Shauna Fulton (Denise Richards) hears about Flo’s birth mom claims, she’ll shut those down immediately. Shauna will insist there’s just no way that’s possible.

A nervous Flo will get grilled by her baffled mother. Shauna will wonder why Flo’s been telling these people she was pregnant when she wasn’t. Wyatt Spencer (Darin Brooks) will immediately rush to Flo’s defense. He’ll contend that Flo wouldn’t lie about something like that. Hope may even chime in about “Phoebe Forrester” (Isabella de Armas and Redford Prindiville) being the proof.

After all, Hope and the others have no reason to suspect this adoption wasn’t legit. Since Flo indeed handed a baby over, they’ll feel confident she gave birth to her. B&B spoilers say Flo will suggest that her mom simply didn’t know she was expecting. She’ll yank Shauna out of there to make a desperate plea, but that’ll bring another round of chaos.

The Bold and the Beautiful spoilers state that Flo will confess the baby swap and beg Shauna to keep quiet. She’ll really need her mother to go along with her on this. Shauna will rant that Flo stole Hope’s baby! She may suggest that if someone had stolen Flo as an infant, she never would’ve been able to offer forgiveness.

Of course, Flo will think that’s exactly the point. Now that she’s a Logan, she can’t infuriate her new family with a revelation like this. Furthermore, coming clean would mean ripping “Phoebe” out of duped Steffy Forrester’s (Jacqueline MacInnes Wood) arms. Flo will convince Shauna to keep her mouth shut, but she’ll definitely get an earful for the mess she helped create.

Hope will determine that since Flo’s part of the Logan clan, “Phoebe” is as well. She may think this explains why she felt so connected to this little one. Hope will get all choked up, but a shocked Brooke Logan (Katherine Kelly Lang) will have to consider how this might change things for Flo. Hope won’t want her mom to go there, but Brooke will still wonder if Flo could have adoption doubts now.

Donna Logan (Jennifer Gareis) and Katie Logan (Heather Tom) will really be thrown for a loop, too. They’ll be stunned by all these connections and the fact that a Logan baby ended up being raised by Steffy Forrester (Jacqueline MacInnes Wood). You can bet some gripping drama’s going to come out of all this!