BY hellodrdavis on April 12, 2019 | Comments: one comment
Related : Soap Opera, Spoiler, Television, The Bold and the Beautiful 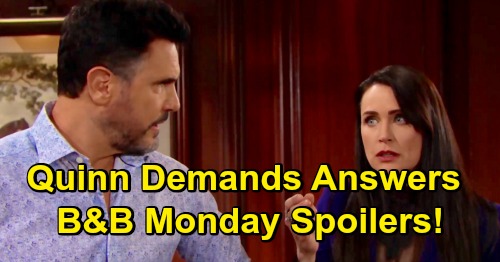 The Bold and the Beautiful spoilers for Monday, April 15, tease that Florence “Flo” Fulton (Katrina Bowden) will remain in deep shock over the news about her paternity. She’s just learned that her father is Storm Logan (William deVry), and that she’s a member of the Logan family. She suddenly has a new family and a new identity, and the whole thing will leave Flo completely overwhelmed.

According to B&B spoilers, Flo’s world will be forever changed going forward. She was horrified to find out that her father was deceased, and that she could never get to know him. And she’ll have a lot to learn about how exactly he died. Of course, viewers know that Storm committed suicide in order to give his sister Katie Logan (Heather Tom) his heart when she was in need of a transplant.

Flo will have to meet the rest of the family soon, including her aunts Katie, Donna Logan (Jennifer Gareis), and Brooke Forrester (Katherine Kelly Lang). That should be an emotional gathering for everyone involved. Storm’s sisters will be stunned to learn that they have a new relative, and they’ll likely be thrilled to know that Storm’s legacy lives on.

Of course, the news of her paternity is bittersweet for Flo. She’s burdened with a terrible secret. She knows that Hope Spencer’s (Annika Noelle) daughter Beth Spencer is alive and well, even though everyone thinks Beth died during childbirth. Flo will have to grapple with the fact that she was a part of a scam that left her own cousin without her baby, and that should be hard for her to live with going forward.

Meanwhile, on the new episode of B&B on Monday, April 15, Quinn Forrester (Rena Sofer) will want some answers. Needless to say, she was quite relieved when she found out that Storm, and not Bill Spencer (Don Diamont) was Flo’s father. If it had turned out that Flo was Bill’s daughter, it would have meant that Wyatt Spencer (Darin Brooks) and Flo – who used to be high-school sweethearts – were half-siblings.

According to B&B spoilers, Quinn will be feeing nosey and it looks like she’ll want details from Shauna Fulton (Denise Richards) about Shauna’s fling with Bill all those years ago. There’s really no reason for Quinn to pursue the gory details, but she probably won’t be able to help herself. Since Quinn and Shauna each slept with Bill around the same general time frame, Quinn will want to know what went down.

We’ll see just how forthcoming Shauna is with the details on her hookup with Bill, as she hasn’t been too willing to talk about the ordeal previously. But knowing Quinn, she’ll coerce the information out of Shauna, and we might learn something about Bill in the process.