BY Heather Hughes on April 12, 2019 | Comments: one comment
Related : Soap Opera, Spoiler, Television, The Bold and the Beautiful 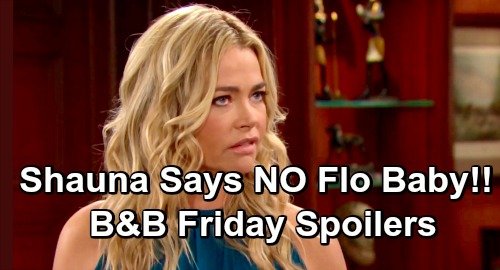 The Bold and the Beautiful (B&B) spoilers for Friday, April 12, tease that Florence “Flo” Fulton (Katrina Bowden) will be overwhelmed by her new family connections. She just found out Storm Logan (William deVry) was her father, so she’ll have some questions soon enough. Flo will be saddened by the news that she’ll never get to meet him, but at least she’ll hear all about him from the Logan clan.

After Flo hears the story of how Storm died, she’ll be touched by the sacrifice he made for Katie Logan’s (Heather Tom) sake. Flo will even get a chance to hear Storm’s heart beating within Katie. She’ll get choked up as she listens and takes in all this shocking information. It’ll be a lot for Flo to deal with, especially since she was just on the verge of coming clean about Beth Spencer.

B&B spoilers say Flo will spend some time bonding with her instant relatives. They’ll cheerfully welcome Flo to the family, but her secret will leave her uneasy. Things will take a wrong turn when Hope Spencer (Annika Noelle) blabs about Flo’s birth mom status – or what she believes is her birth mom status. The truth is Flo was never pregnant at all, and that’s exactly what her mom will blurt out!

When Shauna Fulton (Denise Richards) learns Flo supposedly gave up her child, she’ll express total confusion. Shauna will insist that Flo’s never had a baby, so Flo will have to think fast. She’ll probably pull her mother aside by the time Monday’s new B&B episode, April 15, rolls around and beg her to play along. Shauna may agree to act like Flo simply kept her in the dark, but she’ll definitely know something’s up here.

Other Bold and the Beautiful spoilers say Justin Barber (Aaron D. Spears) will struggle at work. Bill Spencer (Don Diamont) just won’t be able to concentrate, so any important projects may have to wait. He’ll make Justin’s job harder, but he’ll also have someone to celebrate with. Bill was ecstatic to discover Flo belonged to Storm instead, but he’ll still have Flo and Shauna on his mind on Friday.

After Justin congratulates Bill on not being the father, he’ll listen to Bill’s thoughts on the matter. Bill will marvel over Flo’s link to Storm, which also links her to Katie. He may think he was a bit harsh during all the paternity drama and plan a sweet gesture to make this right.