The Bold and the Beautiful Spoilers: Katherine Kelly Lang Leaks B&B Death Hints – What We Know About Who Dies and When 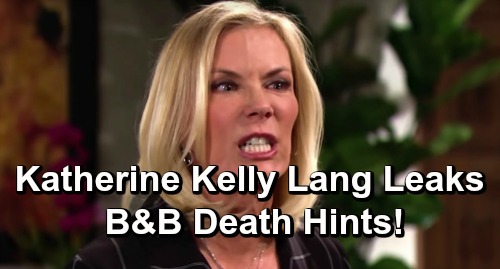 The Bold and the Beautiful (B&B) spoilers tease a shocking death will rock the CBS soap this summer. There may even be more than one fatality before the stunning truth about Beth Spencer comes out. Regardless, a B&B cast member just dropped a hint that tells us a little more.

In an Instagram story, Katherine Kelly Lang (Brooke Forrester) revealed that she’s taping eight shows this week. Lang admitted her brain was a bit scrambled from trying to remember her lies, but she’s hanging in there. It sounds like some gripping drama’s coming up that Brooke will have to be on hand for.

In the next part of this Instagram story, Lang put some of her scripts across the table and gave fans a quick peek. The characters listed for the one on top were Hope Spencer (Annika Noelle), Liam Spencer (Scott Clifton), Ridge Forrester (Thorsten Kaye), Brooke, Xander Avant (Adain Bradley), Zoe Buckingham (Kiara Barnes), Thomas Forrester (Matthew Atkinson) and Charlie Webber (Dick Christie).

This episode is set to air in early July, so that let’s us know these characters will still be alive by then. Most Bold and the Beautiful spoilers point to looming trouble for Xander. There’s a good chance he’ll be killed off eventually, but it obviously won’t be happening right away. We also know the Beth secret is coming out just yet, so Zoe will convince Xander to keep quiet – at least for a while.

Perhaps the guilt will become too much for Xander down the road. That could lead to a dangerous situation where he’s killed over what he knows. No one would put it past creepy Thomas after the changes we’ve seen in his character!

Of course, there are other options to consider here. It’s doubtful B&B would get rid of the fake birth mom, so Florence “Flo” Fulton (Katrina Bowden) is probably safe. She needs to be around to get an earful from both Hope and Steffy Forrester (Jacqueline MacInnes Wood) later. Shauna Fulton (Denise Richards), on the other hand, could be considered expendable.

However, The Bold and the Beautiful spoilers say it makes more sense for the demise to be someone who actually wants the secret to come out. Shauna wants to keep this under wraps more than anyone! Xander still seems like the most likely death candidate, but it’s nice to have a timetable. B&B’s deadly outcome won’t happen in June, but it could happen later in July or even in August.

Are you excited to see the big reveal at the end of all this? We’ll give you updates as other B&B news comes in. Stay tuned to the CBS soap and don’t forget to check CDL often for the latest Bold and the Beautiful spoilers, updates, and news.