BY Heather Hughes on June 5, 2019 | Comments: one comment
Related : Soap Opera, Spoiler, Television, The Bold and the Beautiful 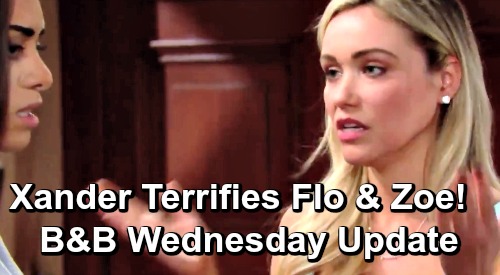 The Bold and the Beautiful (B&B) spoilers update for Wednesday, June 5, tease that Xander Avant (Adain Bradley) will speak his mind once again. He already let Zoe Buckingham (Kiara Barnes) have it for keeping quiet about Beth Spencer being alive. Now it’ll be Florence “Flo” Fulton’s (Katrina Bowden) turn to get an earful. She may even get a worse lecture since she actually posed as the birth mom.

Xander finds the whole thing outrageous, so he’ll insist that all the secrets and lies have to stop. He’ll contend that Flo and Zoe have to tell Hope Spencer (Annika Noelle) the truth right now. This news would save Hope and Liam Spencer’s (Scott Clifton) marriage, so Xander won’t think they should let this go on a moment longer.

However, The Bold and the Beautiful spoilers say Xander will get some pushback from the Flo and Zoe. They’ll gripe about everything that’s at stake, but Xander will stand his ground. He’ll deliver a warning that rocks Zoe and Flo to the core, so it sounds like he’ll threaten to blab himself.

Xander may point out that if Zoe and Flo admit their wrongdoing, it might soften the blow somewhat. Things could get far uglier if Xander is one to squeal on them. He’ll push Flo and Zoe to do the right thing for once, but they’ll choose to keep their mouths shut and roll the dice.

Other Bold and the Beautiful spoilers state that Thomas Forrester (Matthew Atkinson) will get some infuriating updates. He won’t be pleased when Carter Walton (Lawrence Saint-Victor) offers advice and tries to delay “Lope’s” annulment. Thomas wants his plan to keep moving right along, so he’ll lash out at Carter for causing problems on Wednesday.

Carter may just want Hope to be certain of her choice. She’s still in love with Liam, so the fact that she’s ending her marriage is a huge deal. Nevertheless, Thomas will argue that Hope made her decision and it was selfless one. He’ll praise Hope for putting the kids first and insist that her instincts were spot-on. Thomas definitely won’t want Carter getting in Hope’s head and convincing her to take more time.