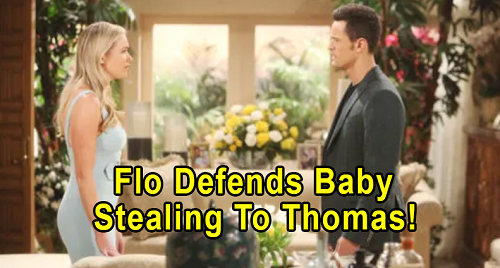 The Bold and the Beautiful (B&B) spoilers tease that Florence “Flo” Fulton (Katrina Bowden) will inadvertently spill the truth about Beth Spencer. She’ll let something slip, which Thomas Forrester (Matthew Atkinson) will find out and confront her about. Thomas will discover that Beth is alive, but he’ll struggle to believe it’s true.

The pressure will finally get to Flo, so she’ll have a bit of a breakdown and tell doubting Thomas the whole story. Naturally, Thomas first reaction should be disgust.

He’ll likely be shocked and appalled that Flo could do something like this. Flo has definitely had moments of extreme guilt along the way, but she’ll still manage to justify her actions during the week of June 10-14.

The Bold and the Beautiful spoilers say Flo will defend her role in the baby swap scheme. Some fans might argue that Flo’s a rotten baby stealer any way you slice it. Is there anything that can really justify keeping a grieving mother and father from their child? Regardless, that’s exactly what Flo did by posing as the baby’s birth mother and staying quiet about it after the illegal adoption.

Flo will likely point the finger at Dr. Reese Buckingham (Wayne Brady) and argue that she didn’t know what she was getting herself into. She may contend that she didn’t understand the gravity of the situation until she was in too deep.

Of course, Thomas may counter that Flo still could’ve come clean at any time. He may not agree that was a good enough excuse for Flo’s silence.

Flo doesn’t get a pass just because she was overwhelmed. Hope Spencer (Annika Noelle) and Liam Spencer (Scott Clifton) were overwhelmed, too – by grief! That’s partially Flo’s fault, so her sob story probably isn’t tugging at many viewers’ heartstrings. Nevertheless, Flo will share her version of events with Thomas and hope he can start to see this from her perspective.

There Is Much At Stake

Flo may remind Thomas that there’s a lot at stake for him as well. The more Thomas thinks about it, the more he’ll realize that this secret works to his advantage – whether he likes it or not. B&B spoilers say it’ll be hard for Thomas to keep his mouth shut, especially when Hope’s in so much pain over the annulment.

Even so, Thomas wants Hope for himself and letting her believe her baby’s dead fuels that agenda. It also protects Steffy Forrester’s (Jacqueline MacInnes Wood) heart, so Thomas will begin keeping this dangerous secret. You can bet Hope won’t be happy down the road. Sooner or later, the truth will come out and Hope’s going to be furious when she finds out Thomas didn’t tell her.