BY hellodrdavis on June 4, 2019 | Comments: one comment
Related : Soap Opera, Spoiler, Television, The Bold and the Beautiful 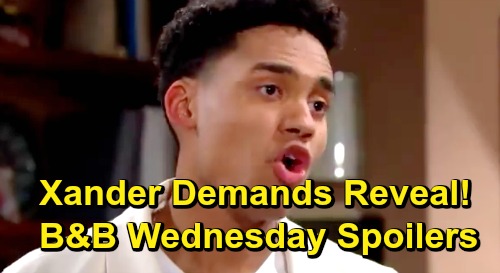 The Bold and the Beautiful spoilers for Wednesday, June 5, tease that Hope Spencer (Annika Noelle) won’t waste any time in getting her marriage ended. She’ll get in touch with Carter Walton (Lawrence Saint-Victor) for assistance in having her marriage to Liam Spencer (Scott Clifton) annulled. Carter will dutifully comply, but it seems that he’ll have some cautionary words for Hope.

Carter may want to make sure that Hope is sure she wants to go through with an annulment right now. After all, both she and Liam have been through a terrible ordeal with losing Beth Spencer, and Carter may advise that she search for another solution aside from ending the marriage. Carter considers Hope to be a close friend, and his words will come from a place of friendship and love.

But according to The Bold and the Beautiful spoilers, Thomas Forrester (Matthew Atkinson) will be on hand to hear Carter’s sage advice, and he won’t like it. Given Thomas’ feelings for Hope, he probably doesn’t want any other man to be giving Hope advice, plus he won’t appreciate the advice that Carter offers. Thomas wants Hope to end things with Liam asap so that he has a shot at her.

On Wednesday’s episode of B&B, look for Thomas to push back and pipe in with his opinion on Hope’s actions as she looks to move forward with the annulment. Thomas will get his two cents in and apparently “support” Hope as she seeks a quick legal resolution.

Meanwhile, on the new episode of B&B on Wednesday, June 5, Xander Avant (Adain Bradley) will still be reeling from the news about Beth being alive. He will have taken an evening to absorb what he heard from Zoe Buckingham (Kiara Barnes), but he won’t be any closer to letting the whole thing go. In fact, it seems that he’ll be even more gung-ho about telling Hope and Liam the truth about their daughter.

Look for Xander to have a heated argument with both Zoe and Florence “Flo” Fulton (Katrina Bowden) on Wednesday’s episode. Zoe will bring Flo into the loop about Xander knowing their secret, and then Xander will want to talk to both of the ladies together. It looks like he’s going to demand that they come clean, to which they’ll certainly balk.

But Xander isn’t going to back down from his position. He really cares about Hope and Liam, and he’s going to insist that they be told RIGHT NOW that their daughter is alive. And when they refuse, The Bold and the Beautiful spoilers say that Xander will make a significant threat against them – most likely, he’ll threaten to spill the secret himself if they don’t do it first.